Let the sexy men of Chippendales sweep you off your feet as they take over the Las Vegas strip – pun intended. Their show is hosted at the grand Rio All-Suite Las Vegas Hotel and Casino and is credited as the sexiest display of live entertainment. The anticipation is palpable, and the lads are in town every night, eager to party with you and your pals. While dancing takes the main stage, there are also interactive games. The show features contemporary backdrops, lights, and new multimedia for an immersive experience the likes of which you’ve never known Vegas has never seen. The men dance, undress, and sing during 75 minutes of high-octane entertainment.

Chippendales was the first all-male stripping group, founded in 1979, but their skill has elevated them from a performance to an experience. Their dancers are recognized for their characteristic upper body costume, which consists of a bow tie, collar, and shirt cuffs worn over a torso that is otherwise bare. Every year, about two million people take in a show, while the Chippendales tour in over 25 locations in the United States, 23 cities in Central and South America, 60 cities in Europe, four in Asian countries, and eight cities in South Africa.

Former celebrity dancers and hosts include “The Bachelor” fiancée Vienna Girardi, who hosted the Chippendales’ “Ultimate Girls Night Out” in 2010, followed by Dancing with the Stars’ Karina Smirnoff. Joey Lawrence danced during a special engagement at the Rio in 2012. They have even been parodied in pop culture, including the classic SNL skit featured Patrick Swayze and Chris Farley competing in an audition to become Chippendales dancers. In 2020, amid the COVID-19 Pandemic, the troupe turned their show into workout videos as an alternative form of exercise to help entertain people in quarantine. 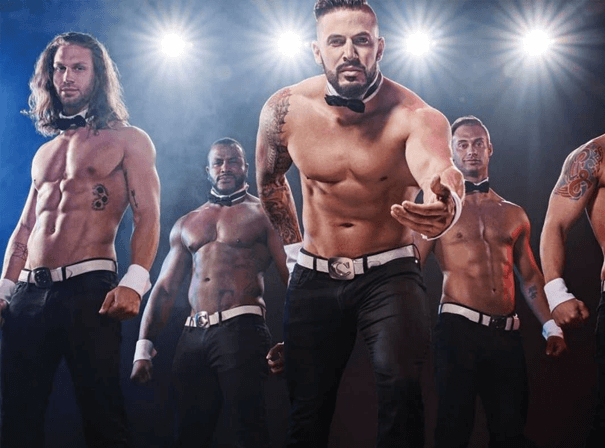