Chris Olave completed his four-year college football career as one of the best wide receivers in the United States. And he has the stats to back it up. He graduated from Ohio State with the school record for most career touchdown receptions (35), breaking a record that had stood for over 20 years. He impressed at the 2022 NFL Combine, particularly with his 4.26-second 40-yard dash and has been linked with some of NFL’s major franchises, including the Indianapolis Colts.

Olave was born in San Ysidro, California, in June 2000. At Mission Hills High School in San Marcos, he excelled at both football and track-and-field. But it was football that won out as he became a four-star recruit and was ranked as one of the top high school wide receivers in the country. Despite offers from other colleges, Olave committed to Ohio State and their team, the Buckeyes, playing his freshman season for them in 2018.

Olave’s journey to the top really got going in his sophomore Buckeyes season: he played in all 13 games, played in the Rose Bowl, and eventually won Third Team All-Big Ten honours. He built on this in his junior and senior seasons, winning First Team All-Big Ten honours in both seasons and being named a Second Team All-American in the latter. He also played in many more big Bowl games and take part in the 2021 CFP National Championship game. He could have put himself forward for the Draft at the end of his junior year, but decided to perfect his game with the Buckeyes — which also allowed him to break the school touchdown-reception record. 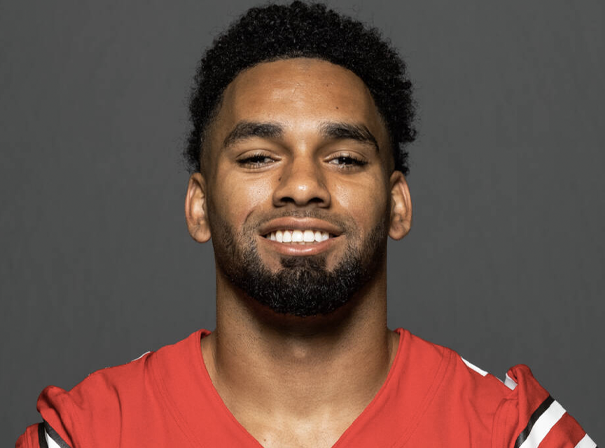