Former gymnast Dominique Moceanu is an Olympic gold medal winning athlete, who also became the youngest gymnast ever to win the US National Championships.

Moceanu has always been a talented gymnast, joining her local junior teams as a child and progressing to a state level. She went on to represent her home country of the United States at international competitions, winning a silver medal at the 1992 Junior Pan American Games. In 1995 she made history by becoming the youngest gymnast ever to win the senior all around title at the US National Championships, and was the youngest member of the 1995 World Championships team and the 1996 Olympics team. Moceanu was part of the gold medal winning gymnastics team at the 1996 Olympic Games in Atlanta, nicknamed the Magnificent Seven. Her success continued in the years after, with another all around gold medal in the 1998 Goodwill Games before she retired from the sport in 2000 due to injury troubles. She made a brief return to the sport in 2006 before retiring fully.

Since retiring from gymnastics, Moceanu has become a gymnastics coach at Gymnastics World in Ohio, as well as opening her own training centre, the Dominique Moceanu Gymnastics Center and Carmen Yoga Studio. She has also released a memoir called Off Balance in which she discusses her life and career. Moceanu’s son Vincent is an aspiring gymnast and hopes to follow in his mum’s footsteps at the gymnastics in 2028. 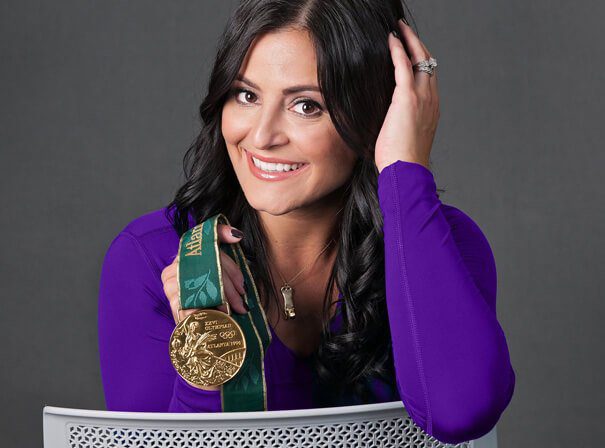