Douglas Flutie is an American former NFL quarterback and football analyst at NBC Sports who appeared on the popular television series Dancing with the Stars. He is a Canadian Football Hall of Famer and is widely regarded as the best CFL player ever to participate in the sport.

Flutie’s rise to football stardom started at Boston College, where he won the 1984 Heisman Trophy and the Davey O’Brien National Quarterback Award the same year. Flutie’s football career was carved into the history books when he produced the famous “Hail Flutie” touchdown pass against Miami, which is regarded as one of the greatest plays in American sports history.

His playing career has seen him turn out for the Los Angeles Rams, New Jersey Generals, Chicago Bears, eventually becoming the starting quarterback for the New England Patriots in 1988. In 1990 Flutie signed with the BC Lions and, in ’91, threw for a record 6,619 yards. He made a switch to the Calgary Stampeders, where he won the 1992 Grey Cup. In 1996, he moved to Toronto Argonauts, winning back-to-back Grey Cups in 1996 and 1997. He was MVP in all three Grey Cup victories. Also, Flutie was named the CFL’s Most Outstanding Player a record six times. 1998 saw him return to the NFL with the Buffalo Bills, where he earned Pro Bowl and NFL Comeback Player of the year awards and was inducted into both the College and Canadian Football Hall of Fame.

After retiring from football, Flutie served as a college football analyst for ESPN and ABC and since 2011. He has worked for NBC Sports and NBCSN. Flutie and his wife formed the Doug Flutie Foundation in 1998 to help people and families affected by autism. 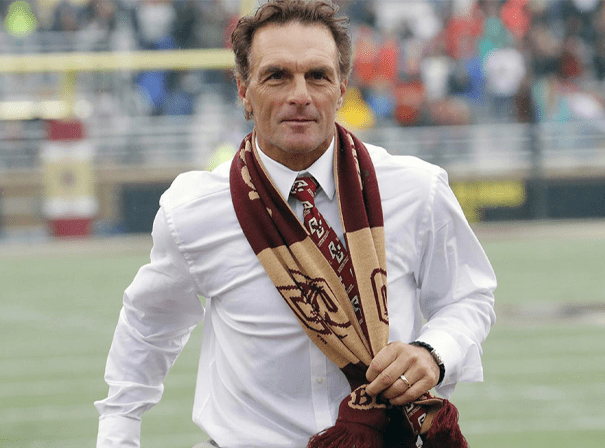