Eniola Aluko is one of England’s most decorated female Soccer players, and a pioneering voice in Soccer commentary. She has had a successful professional career that has seen her play in the top leagues of English, American and Italian women’s Soccer. Internationally, she has over 100 caps for England, competing at three World Cups, and represented Great Britain at the London 2012 Olympic Games.

Aluko’s early career began in the FA Women’s Premier League. She played with Birmingham City, where she was named Young Player of the Year in 2003 at The FA Women’s Soccer Awards, and later played at Charlton Athletic and Chelsea. With Charlton, she was part of a team that won the FA Women’s Community Shield, the FA Women’s Cup, and the FA Women’s Premier League Cup. In 2008 came a move to the US, where she played in Women’s Professional Soccer for teams including St Louis Athletica and Sky Blue FC, before returning to England to play for Birmingham City and then Chelsea in the renamed Women’s Super League. She most recently moved to the Italian club Juventus, winning both the Serie A and the Coppa Italia to score a season double in 2019.

Aluko began representing England at under-17 level. She first played for the senior team aged just 17, and her first international tournament was Women’s Euro 2005, which she played whilst sitting her A-levels. She would go on to play for England 102 times, including at the 2015 Women’s World Cup where the team came third.

In the media, Aluko has continued to break barriers. She was the first woman to appear as a pundit on the BBC’s Match of the Day, and was the first female athlete in the UK to secure a prestigious endorsement deal with sportswear brand Under Armour. 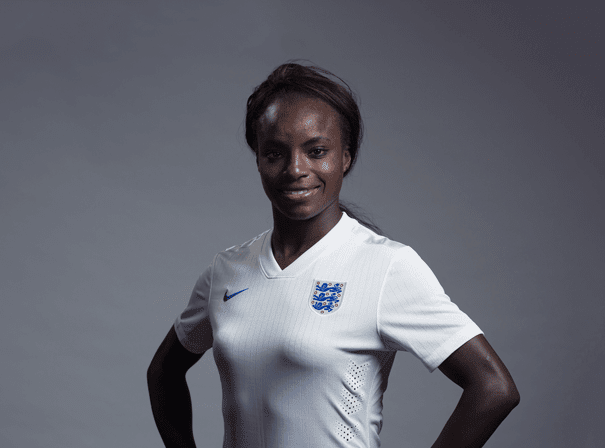