Daredevil and skydiver Felix Baumgartner has wowed millions with his incredible and death-defying feats. He is best known for his many BASE jumping records, and his long-standing partnership with Red Bull, including his record-shattering Stratos skydive in 2012.

Baumgartner began skydiving at the age of 16, gaining further experience with the Austrian military’s demonstration team, and later teaming up with Red Bull to perform demonstrations for the company. In the 1990s, he began BASE jumping – parachuting from a building or other fixed object – and developed a reputation for his headline-grabbing jumps. He has broken 14 BASE jumping world records, including for the highest parachute jump from a building when he jumped from Kuala Lumpur’s Petronas Towers, and becoming the first person to skydive across the English Channel.

In 2012, Baumgartner made headline news around the world when he took part in the Red Bull Stratos project to break the then-record for the world’s highest sky dive. The attempt saw him ascend into the earth’s stratosphere to jump from a height of nearly 39 kilometres. During the feat, he also set a record for the fastest free fall, reaching 843.6 miles per hour, and becoming the first person to break the sound barrier without engine power. The jump was aired by dozens of broadcasters across the globe and became the most concurrently viewed event on YouTube, with over 8 live million viewers.

Baumgartner is a licensed helicopter pilot, takes part in motor racing, and is an advocate for charitable causes including the Wings for Life Spinal Cord Research Foundation. He has received recognition and awards from across the world for his achievements, including a Laureus World Sports Award, a Bambi Award, and was named a National Geographic Adventurer of the Year. 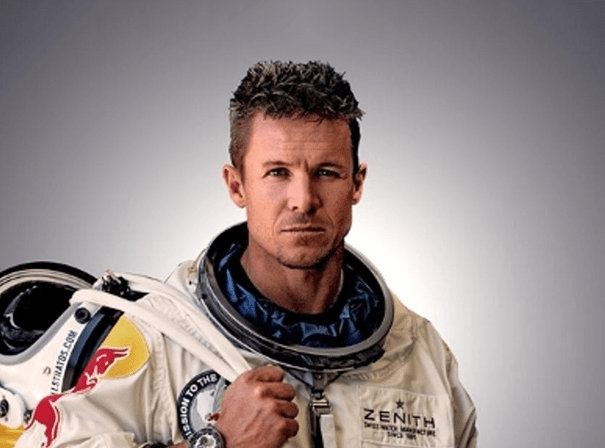