The incredible Fredrick Lee Kerley is a track and field sprinter who specialises in the 400m. He has earned several medals at the World Championships in the 400m and the 4 x 400m relay, including an individual bronze and a relay gold. He achieved a personal best running time of 43.64 secs in 2019, making him the eighth fastest man in history over 400m. He also has a personal best of 20.24 secs in the 200m. He comes from a talented sporting family: his younger brother, Mylik, is a world class 400m runner, and his cousin, Jeremy, plays football for the New York Jets.

Kerley was born and raised in Texas, and proved to be a talented sportsman from an early age, excelling in football, basketball, as well as in athletics, while at High School. He later attended the Texas A &M University. He tried out for the US Olympic team in 2016, and went on to represent the US at the NACAC Under-23 Championships where he anchored the 4 x 100m relay team to gold. In 2017 he won the 400m at the NCAA Division/Championships in a world leading time of 44.85 secs, one of the top ten fastest indoor times ever. The same year he set the NCAA record in the men’s 400m at the 2017 NCAA West Preliminary with a time of 43.70 secs, taking three-tenths of a second off the 44.00 record set by Olympic champion Quincy Watts, set almost 25 years earlier. 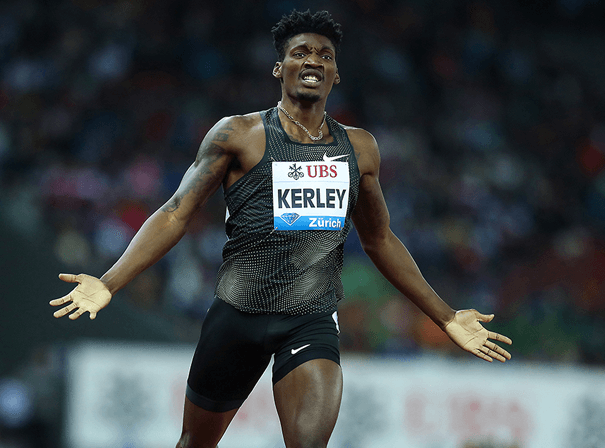