Presenter and motor racing driver Grant Denyer is best known for fronting popular shows such as Australia’s Got Talent and Family Feud. Beyond his hosting work, Denyer is a former winner of Dancing with the Stars, and holds five Guinness World Records. He won a prestigious Gold Logie Award in 2018 for Most Popular Personality on Australian Television.

Denyer started out as a journalist and news reporter for Prime Television, before covering his passion of motorsport as a V8 Supercar pit reporter for Network Ten. His breakout came when he was appointed weather presented on popular Network Seven breakfast show Sunrise, making him a familiar face to millions across Australia. In 2006, he competed in the fourth season of Dancing with the Stars and went on to win the competition with professional partner Amanda Garner. Following his victory, he hosted a string of hit reality competitions, including It Takes Two, Australia’s Got Talent, and Iron Chef Australia, and later fronted the quiz shows Million Dollar Minute and Family Feud.

Denyer has hosted sports coverage from Olympic Games in Sydney, Beijing and London, has cameoed in soap opera Neighbours, and has appeared on shows including Chris & Julia’s Sunday Night Takeaway and Hughesy, We Have a Problem. He was the co-host of The Great Australian Spelling Bee with Chrissie Swan, has served on the breakfast team at 2Day FM, and in 2019 he returned to Dancing with the Stars – this time to host, alongside fellow ex-contestant Amanda Keller.

Denyer has competed in motorsports since 2001, initially in the V8 Utes Racing Series, and later in series including the V8 Supercars and the Australian GT Championship. He has raced with Dick Johnson Racing, MW Motorsport and Kelly Racing, and in 2016 clinched the CAMS Australian Endurance Championship with racing partner Nathan Morcom. 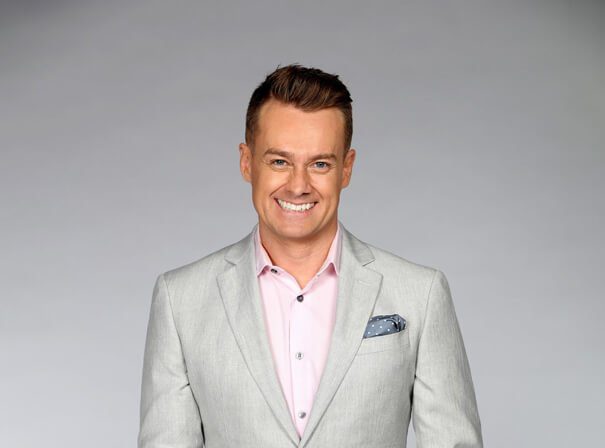