Largely considered to be the world’s foremost expert on chimpanzees, Dame Jane Goodall is an English primatologist and anthropologist, best known for her over 55-year study of family and social interactions. She is also the founder of the Jane Goodall Institute and the Roots & Shoots programme and worked extensively on conservation and animal welfare issues. In 1958, Goodall began studying primate behaviour and primate anatomy in London.

Two years later she travelled to Tanzania’s Gombe National Park, which marked the beginning of her over half a century long study of wild chimpanzees. In 1962 she was sent to the University of Cambridge and obtained a PhD in ethology, becoming the eighth allowed to study for a PhD there with no prior BA or BSc. 1965 saw the completion of her thesis on the Behaviour on free-living chimpanzees, which detailed her first five years of study at the Gombe Reserve. In 1977, Goodall founded the Jane Goodall institute, which has expanded to nineteen offices worldwide and is widely recognised for community-centred conservation and development programs in Africa.

Today, she dedicates practically all of her time to advocacy for the chimpanzees and their environment, travelling almost 300 days a year. In 2010 Goodall wrote a memoir entitled Through a Window: My Thirty Years with the Chimpanzees of Gombe, detailing her findings which revolutionised contemporary knowledge of chimpanzee behaviour, providing further evidence of the social similarities between humans and the primates. Goodall is also a board member for the world’s largest chimpanzee sanctuary outside of Africa, Save the Chimps in Fort Pierce, Florida. She has received countless honours for her humanitarian and environmental work and in 2004 she received a DBE. More recently, in 2019 Time magazine named Goodall one of the 100 most influential people in the world. 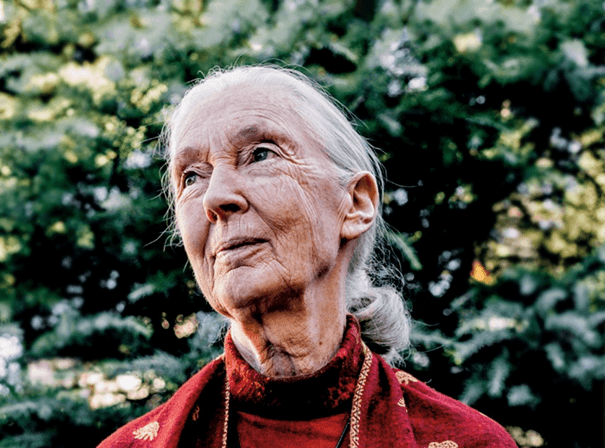