Positive and motivational track and field athlete Jenna Prandini is best known for her remarkable sprinting achievements. She is a two-time national champion in the 200m, and a 2016 Olympian. Her personal best times are: 7.15 secs in 60m (indoor), 10.92 secs in the 100m, and 22.16 secs in the 200m. Her best Long Jump distance is 6.65m (indoor), and 12.73m in the Triple Jump. In 2015, she won the Honda Sports Award as the nation’s best female track and field competitor.

Born and raised in Clovis, California, Prandini started showing an interest in athletics at an early age, primarily in jumping events. She started competing at High School in 2008, winning her first Long Jump and Triple Jump events in 2010. In 2011 she won all three of her events: Long Jump, 100m, and 200m. The same year she came 1st in the USATF Junior national championships in the Long Jump. She won the 100m at the 2015 NCAA Division/Outdoor T&F Championships as a Senior at the University of Oregon. She is the second female to win the NCAA 100m, and the USA National Outdoor 200m in the same year. She took silver in the 4 x 100m relay at the 2015 World Championships, and then qualified for the 2016 Olympics in Rio for the 200m by placing third at the 2016 Olympic Trials. Her next medal haul came in 2018 when she won two golds at the NACAC Championships in the 100m and in the 4 x 100m relay. She then won a third gold and a bronze medal at the Continental Cup for the 4 x 100m and the 100m respectively.

Prandini regularly connects with her legions of dedicated fans and followers through Twitter, Instagram and Facebook, posting about her life both on and off the track. She also has her won official website, jenna-prandini.com. 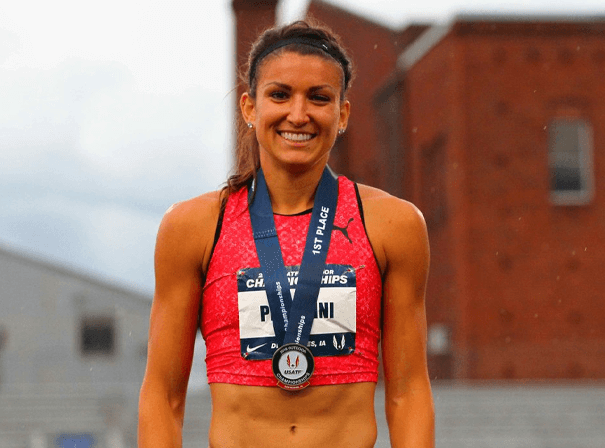