Julia Landauer is a NASCAR driver that has found success in professional racing events in the United States, Canada, and Europe. She made history as the first woman to ever lead a lap in NASCAR Pinty’s Series and competes in the NASCAR Whelen Euro Series.

Born in New York City in 1991, Landauer became the youngest female champion in the Skip Barber Racing Series at just 13 years old. She then raced in a wide variety of competitions before being noticed by Bill McAnnally Racing in 2009. In 2015, she became the first woman to win a NASCAR Track Championship at Motor Mile Speedway in her division. Landauer then made her much anticipated debut in NASCAR K&N Pro Series West in 2016, amassing several top-five finishes. After competing in both K&N Pro Series East and West in 2017, she graduated to Canada’s NASCAR Pinty’s Series in 2017. While in Canada, Landauer made history as the first woman to lead a lap in the legendary Pinty’s Series. In 2020, she began her stint in NASCAR Whelen Euro Series. Competing in EuroNASCAR 2, she quickly made an impact, finishing fifth in the third race of the year at Circuit Zolder in Belgium.

Landauer has become one of NASCAR’s most popular upcoming drivers and was the only female member of NASCAR’s Next Class of 2016-17. She was an honoree for the Forbes 30 Under 30 sports list in 2017. A contestant on the 26th season of CBS’s Survivor, Landauer is also a successful motivational speaker with her own TEDx Talk. She was featured in Fortune’s Most Powerful Women and served as an external advisor to Hyundai’s Robotic-Augmented Design in Living Experience. A successful NASCAR driver with a one-of-a-kind career, Julia Landauer is one of her generation’s finest talents. 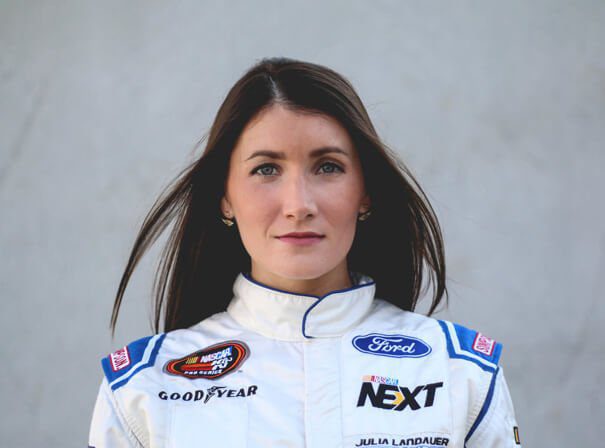