Mark Robert Rypien is a retired Football quarterback who spent 14 seasons in the National Football League. He was born in Calgary, Alberta, Canada. Rypien attended Washington State University and was taken in the sixth round of the 1986 NFL Draft by the Washington Redskins. With the Redskins in Super Bowl XXVI, he became the first Canadian-born quarterback to start in the NFL and be awarded Super Bowl MVP. Rypien was primarily known for his incredible deep passing accuracy. He played for a number of other NFL teams and Brett, his nephew, also played in the NFL.

Rypien was named the starter for the Washington Redskins in 1989, replacing the injured and aging Doug Williams, and he quickly established himself as a star quarterback, throwing for 3,768 yards and 22 touchdowns while leading the Redskins to a 10-6 record. Rypien’s best season was 1991, when he threw for 3,564 yards, 28 touchdowns, and 11 interceptions while leading the Redskins to Super Bowl XXVI following a 14-2 regular season. He was voted the game’s MVP after throwing for 292 yards and two touchdowns while guiding his team to a 37-24 victory over the Buffalo Bills. In both 1989 and 1991, he was named to the Pro Bowl. 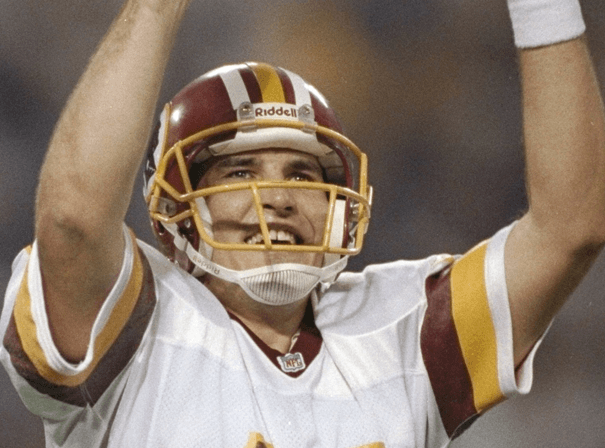