The legendary Nigel De Jong is a professional Soccerer, who has played for Ajax, Manchester City, A.C. Milan, and Hamburg over his prolific career. He was also a regular of the Netherlands national team, and has won a World Cup runners-up medal in 2010 and a bronze medal at the 2014 FIFA World Cup with them. He is a tireless grafter, and has garnered a reputation of being a combative and feisty defensive midfielder, earning him nicknames such as “The Destroyer” and “Lawnmower”. Away from Soccer, De Jong owns a specialist car dealership (Continental Cars) which operates in Europe (Hamburg) and the Middle East.

Born and raised in Amsterdam, De Jong showed that he was incredibly gifted at Soccer from the moment he could walk. As a youngster he joined the Ajax youth academy and worked his way through the ranks to make the first team at the age of 17. Two years later, he made his international debut, and went on to obtain 81 caps between 2004 and 2015, scoring one goal. He moved on from Ajax in 2006 to join Hamburg in search of first team Soccer, and then moved to Manchester City in January 2009 for an estimated £18 million. He moved to Italian side A.C. Milan in August 2012 where he spent three and half years, before moving to the MLS to play for L.A. Galaxy in February 2016. He returned to Europe in August when he signed with Turkish side Galatasaray. He joined German side Mainz 05 two years later, before moving to Qatar to play for Al Ahli, and then for Al Shahania.

De Jong regularly connects with his legions of followers and fans through Instagram, and Twitter, posting pictures and videos of his life both on and off the Soccer pitch. He is also available for that personalised shout-out via the Cameo platform. 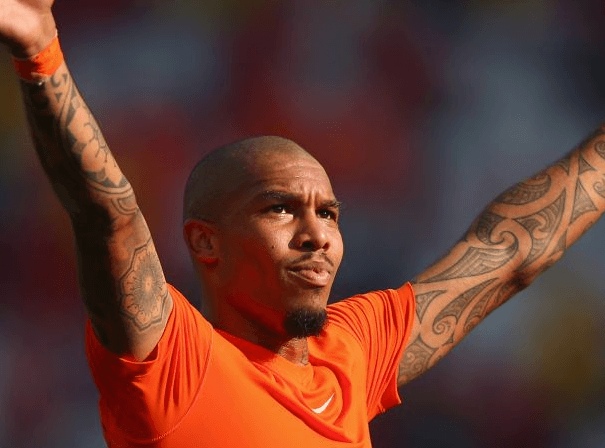