Any true heavy metal fans will know the name Nigel Glockler. A key feature of popular band Saxon, Glockler had shredded many a drum kit in his long, twisting career. 1980 was the year that it all began for Glockler when he joined the thoroughly British Krakatoa – who released seamless music, constantly appeasing the hungry heavy metal appetite of fans worldwide. Glockler was only with the band for one year, before becoming a session musician for singer Toyah. After nearly a year, Glockler levelled up into Pete Gill’s previous positions and took his new place as the drummer for popular band Saxon.
Even amidst a few temporary breaks, Glockler still performs with Saxon to this day, yet that doesn’t mean he hasn’t had a few side projects in his array of musical talent. During the 90’s, Glockler contributed to Steve Howe’s album Turbulence and Aqua by Asia, along with a further two albums by The Original Iron Men, all whilst remaining a key, hardcore drummer for Saxon. Further ins and out with the band continued for a while, and an unfortunate neck injury impeded Glockler’s ability to play drums, but come 2001 – and Glockler was back and better than ever, playing his part in album Mad Men and English Dogs alongside fellow Saxon Doug Scarratt. Glockler continues to tear up the drum set in traditional heavy metal style, performing for more than 30 years with Saxon regardless of temporary breaks. A true drummer at heart. 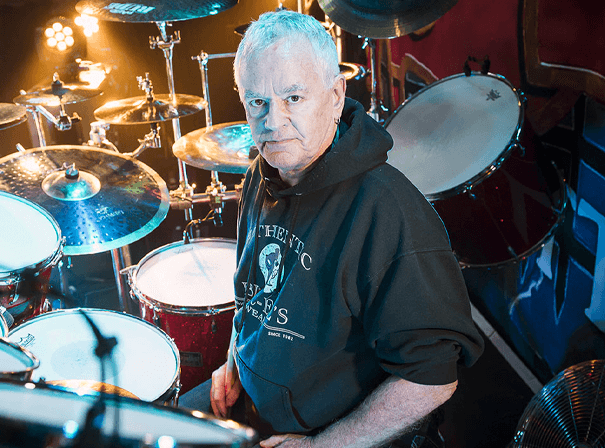