Nigel Owens is recognised as one of the world’s best rugbyreferees. As the first openly gay man to come out in professional rugby as areferee, he’s made history within the sport. Born and bred on a council estatein Mynyddcerrig, Wales, he first picked up the referee whistle aged 16. Owensofficiated his first international game in 2005 between Ireland and Japan inOsaka. He is the current record holder for test matches refereed, and made hisWorld Cup debut in 2007 in France. He is the only referee ever to be appointedto referee three consecutive Heineken Cup finals (2015, 2016 & 2017) aswell as refereeing another three finals in 2008, 2009 and 2012, making it arecord six European cup finals as well as two challenge cup finals. In 2015,Nigel was appointed referee for the 2015 Rugby World Cup Final between NewZealand and Australia at Twickenham.

Aside from refereeing, Nigel is a co-presenter on S4C’sJonathan, the rugby-themed Welsh language show hosted by Jonathan Davies. Healso presents other Welsh language chat shows on S4C. Nigel has earned hugeplaudits for his Desert Island Discs programme on Radio 4 hosted by KirstyYoung. In 2017 he presented the Panorama programme on Eating Disorders in Menand Boys.

Nigel’s autobiography was released in in Nov 2008, in Welshcalled “Hanner Amser” (Half Time). After earning the title of Gay SportsPersonality of the Year from gay rights group Stonewall at their annual 2007awards ceremony in London, Nigel was named Gay Sports Personality of the Decadein 2016. In 2011, he was made a member of the Gorsedd of Bards at its NationalEisteddfod in Wrexham for his services to the Welsh language. Topping hisawards cabinet off with an MBE for services to sport in June 2016, Nigelcontinues to referee international rugby matches around world, and has justbeen selected to referee at his fourth consecutive Rugby World Cup in Japanthis year 2019. 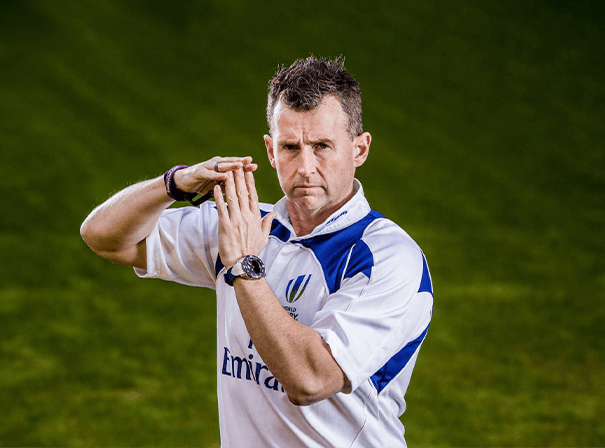