Rick Steves is a television host and best-selling guidebook author famous for encouraging Americans to travel so they can broaden their perspectives. Steves is the producer and host of several public television and radio programmes broadcast across America – including Rick Steves’ Europe and Travel with Rick Steves – and is widely considered the leading authority on European travel in America. He has set up numerous free resources to give all Americans access to travel information, including his Rick Steves Audio Europe™ app (containing geographical information and self-guided walking tours), the Rick Steves’ Europe website and Rick Steves Classroom Europe™, a set of short video clips for teaching purposes. He is the author of numerous best-selling travel guides – including Europe Through the Back Door – and has been a syndicated newspaper columnist since 2006.

Born in California, his love of travel began when he visited Europe with his parents at the age of 14. After graduating from the University of Washington, he began to teach travel classes through The Experimental College and worked as a tour guide. He rose to prominence as a travel expert when his first book, Europe Through the Back Door – a general guide on how to travel in Europe – was published in 1979. Since then, he has written city and regional guides, phrase books and country guide books, a guide on travelling more thoughtfully – Travel as a Political Act – and has become an advocate for independent travel.

He is also the founder and owner of his own travel business, Rick Steves’ Europe, which runs a tour program taking 30,000 Americans to Europe every year. Steves has provided $8 million to build two new neighbourhood centres where he lives, and also makes an annual $1 million donation to Bread for the World. 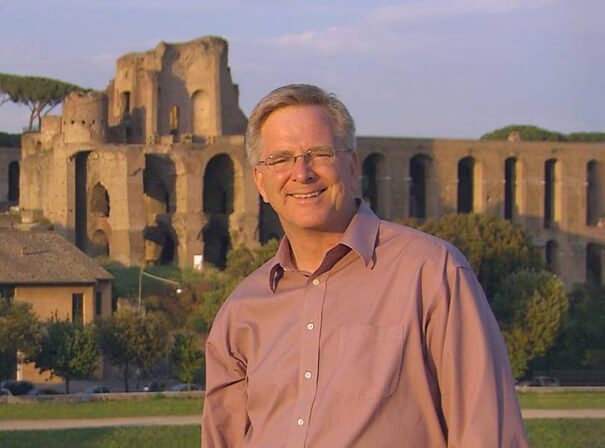