Former Arsenal, Manchester United, and Netherlands striker Robin Van Persie is his country’s all-time top scorer. During a nearly 20-year playing career, he scored over 320 goals in nearly 700 appearances for club and country. He won the UEFA Cup, FA Cup, KNVB Cup, and Premier League, and was a World Cup and Champions League runner-up.

Born in Rotterdam in 1983, Van Persie began playing for local club Excelsior aged just five. He remained with them throughout his childhood, but it was with local rivals Feyenoord that he turned professional aged 17. His first season ended with a starting place in the UEFA Cup Final-winning team of 2002 and winning the KNVB Best Young Talent Award. In 2004, Arsenal, then riding high in the Premier League, signed him. Despite a rocky start, he settled down and was soon winning Player of the Month and Goal of the Month awards. During the 2006/07 season, he was Arsenal’s top scorer despite spending a large part of the season injured. By 2012, he had been appointed club captain and was in the goal-scoring form of his career, at one point netting 35 times in one calendar year.

Before the 2012/13 season, Van Persie moved to Manchester United, one of the world’s most iconic clubs. He ended his first season there as their Player of the Year and was shortlisted for UEFA’s Best Player in Europe Award. With 50 international goals, he remains the Netherlands’ highest-ever scorer. At the 2010 World Cup, he scored goals with both feet, his head, and from open play, a penalty and a free-kick, the first player to do so since 1966. 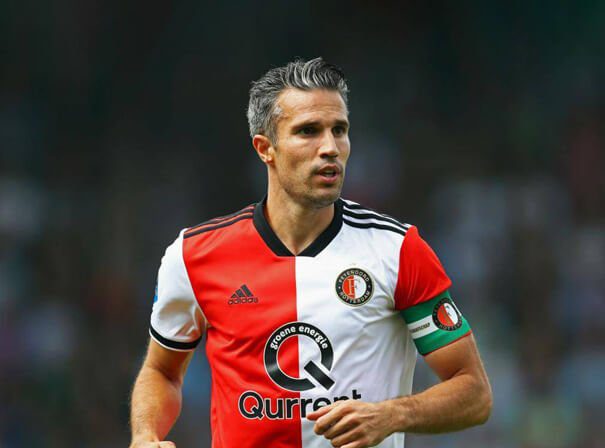