Stanley A. McChrystal is a former US Army four star general, celebrated for his command of Joint Special Operations Command which took place in the mid-2000s. He also founded the McChrystal Group in 2011; a management consultancy, advisory service and leadership development firm which McChrystal he is also a partner in.

McChrystal graduated from the United States Military Academy in New York, being appointed a second lieutenant, quickly climbing the ranks from weapons platoon leader, rifle platoon leader and executive officer. In 2003 he became Commander of JSCOC, a position he held for half a decade, during which he was attributed for Abu Musab al-Zarqawi, Iraq’s Al-Qaeda leader’s death. McChrystal then became a Director of Joint Staff until serving as Commander of the International Security Assistance Force; his very last assignment.

McChrystal was celebrated for saying what he thought; especially not being afraid to say what he knew others were thinking. His forthcoming and somewhat unreserved nature was, according to citations, some of the reasons for his position to lead all forces in Afghanistan. He has also been referred to by Former Secretary of Defense Robert Gates as “perhaps the finest warrior and leader of men in combat [he] ever met.”
Since 2010, McChrystal has been teaching International Relations at Yale University as well as founding his latest endeavour: the McChrystal Group. 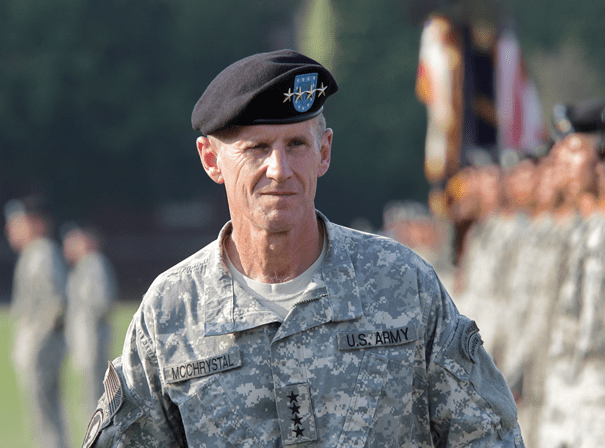