Ugo Amadi is an Football free safety who plays in the National Football League (NFL) for the Seattle Seahawks. The hugely talented young player was drafted by the Seattle Seahawks in the 2019 NFL Draft fourth round and previously played college football at Oregon. Amadi won the prestigious Lombardi Award in 2018 as a senior.

Born in Nashville, Tenessee, Amadi began to impress as a player whilst attending John Overton High School in his hometown. After receiving offers from Duke, Cincinatti , LSU, Penn State,Texas A&M, Kentucky, Mississippi State, Mississippi, Purdue, Northwestern, Tennessee and Syracuse, Amadi eventually signed with Oregon Tennessee as a consensus four-star cornerback. From 2015 to 2018 he played in all 51 games, racking up 34 starts and finished with 9.5 tackles for a loss for 54 yards, 165 total tackles, 33 passes defended, two touchdowns, eight interceptions for 122 yards, and four forced fumbles and two fumble recoveries on defense and three sacks for 16 yards.

His impressive performances led to Amadi winning the 2018 Lombadi Award – an award that honours college football’s most outstanding player and leader of the year. Following his remarkable success in 2018, he was drafted in the fourth round (132nd overall) by the Seattle Seahawks in the 2019 NFL Draft.
The young star recorded seven pass breakups and 54 tackles over 14 games during the 2020 season, establishing himself as the primary cornerback for the Seahawks in 2020, and Amadi continues to rise to the pinnacle of the sport. 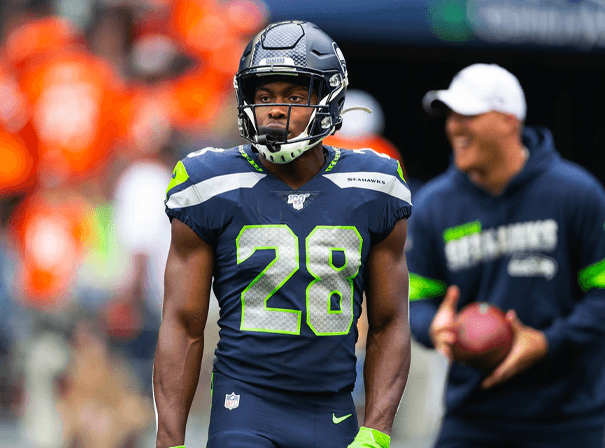