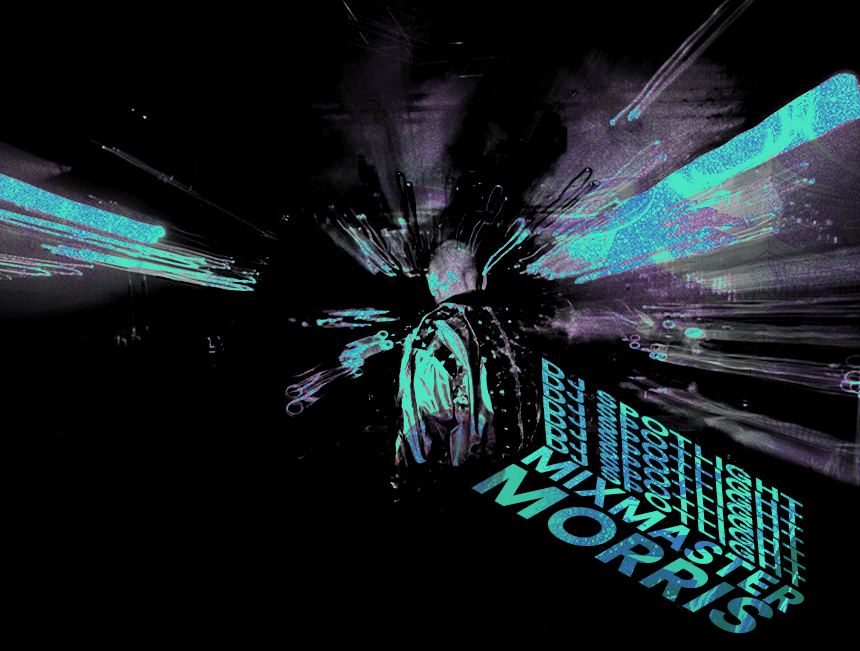 Known within the music industry as a DJ’s DJ, Mixmaster Morris has remained a central figure in British dance music for over three decades.

This underground legend has played in over fifty countries at events, venues and clubs of all sizes, making regular appearances at countless festivals across the globe: he’s held down a six-year spot as a resident at Glastonbury Festival, played gigs with Aphex Twin and The Orb and opened for The Chemical Brothers and The Prodigy.

Morris made history in the early ’90s by putting together some of the first ‘chillout’ compilations while producing extraterrestrial ambient electronica as The Irresistible Force: 1992’s ‘Flying High’ and 1994’s ‘Global Chillage’ essentially invented the ‘chillout’ sound, blending samples and loops with atmospheric psychedelia to produce empyrean soundscapes that were years ahead of their time.

Morris has continued to DJ around the world throughout the last two decades, holding down residencies at The Big Chill festival and Berlin’s Love Parade while bringing his deep and immersive sounds to audiences across the globe. We caught up with Morris to ask about his new live show, the current state of ambient music and defining moments in his extensive career.

Thanks for sharing this mix with us. Could you tell us about the thoughts and story behind it?

I put this one up as it’s the most played of all my mixes on Mixcloud, with over 70,000 listeners. It’s a good example of my chillout sets at Nubient, a night I ran for the last 20 years… the idea was to mix chillout with jazz and soul to develop a new style. There are 700 more mixes on Mixcloud, going back to 1991: no two are the same. This is a private party I played in January, with everyone in animal costumes! The theme was cosmic disco, but as usual, I mixed up many genres.

“I’m writing tracks for a fifth Irresistible Force album – plus making a compilation CD for a Japanese beach bar.”

Tell us about what you’ve been up to in 2018 – have you been working on any new music?

I released an album, KIRA KIRA in November 2017, and am now working on a remixes album. I have also done remixes this year for DF Tram, Saafi Brothers and Bluetech, and I’m writing tracks for a fifth Irresistible Force album – plus making a compilation CD for a Japanese beach bar.

What was your best show of last year: where was it and what made it special?

I played in Seoul for the first time in 2018, that was really exciting – the Houghton Festival is a special event too. Playing at Hostal La Torre Ibiza is awesome, and it was a big honour to be invited by DJ Harvey to play at Ministry of Sound with him.

Which musicians, producers or DJs are exciting you at the moment? Anyone we need to keep an eye on?

I am in love with Thundercat and the Brainfeeder crew, Louis Cole and that whole LA scene. Also that unique duo Tennyson from Canada.

“I am in love with Thundercat, the Brainfeeder crew, Louis Cole and that whole LA scene.”

You’re a musician, a producer and a DJ, but which came first? Tell us about how you discovered electronic music.

I started DJing back in 1981 and bought my first synth (a Wasp) around this time. The first electronic group I saw was Suicide back in 1978, supporting The Clash. I was a huge fan of Kraftwerk, and later the whole Krautrock school, then Planet Rock and the Electro scene of the early 80s seemed like the next step. Another influence was the first Art of Noise record, which used sampling in an upfront way. 1984 I went to Berlin for the first time and experienced all-night warehouse parties, unlike anything in the UK.

On my return I bought my first computer and then started using samplers – I started out remixing indie bands in 1986 using my Atari ST, then joined Pirate station Network 21 alongside Coldcut and worked on some of their earliest music. 1987 I started buying Chicago house records, and then doing live acid house sets in 1988 alongside Adamski, Guru Josh, and A Guy Called Gerald.

In 1989 I toured with Psychic TV and became tour DJ for The Shamen, leading to hundreds of gigs across the UK and Europe. In 1991 I joined Rising High Records, who released my first three albums, and produced a lot of remixes – including Coldcut’s Autumn Leaves, named by Fatboy Slim as his favourite track of all time.

I played a lot of gigs with The Orb and Aphex Twin in the 90s, and became resident at key clubs like LOST, Megatripolis and Club UK. I also discovered a lot of new artists like Boards of Canada, Matthew Herbert, T-Power, Black Dog and Global Communications, helping to popularise them through my Mixmag column and radio show on KISS FM, The Chillout Zone.

As a DJ with over 30 years of experience in the industry, you must have some fantastic memories. What would you say are the defining moments of your career?

The release of Flying High was a turning point, suddenly I was in demand all over the world. Winning the Ibiza DJ Award three times was a high point, and one that will probably never be matched. Playing B2B with John Peel at Glastonbury festival was of course a delight. My debut show in Tokyo at Yellow Nishiazabu is another one that I will never forget… and people over there are still talking about it 25 years later.

As a pioneer of the chillout movement, it could be said that you paved the way for the current popularity of the ambient scene. What are your thoughts on the state of the genre today?

The original chillout scene was based around the Chill Out room…. something lacking from most parties nowadays – although it’s starting to make a comeback at festivals. There are certainly more ambient DJs and releases now than any time in the last 25 yrs. Japanese ambient music has been extremely trendy recently, and the scene there is very strong. Sunset The Marina (Tokyo Bay) might be my favourite chillout club at the moment, and recently the Japanese have developed a Walearic scene – Japanese Balearic.

Do you believe that chillout and ambient music is an integral part of rave culture?

Yes, 100%… but it can reach even further than that. Everyone needs to chill out sometimes.

What are you working on currently? Are there any upcoming projects in 2019 that you can tell us about?

I’m busy developing a new live show, based around iPads and iOS music software. I would like to develop some software of my own too. I’m hoping to produce some bands this year, and my 1992 album Flying High is being reissued on vinyl.

Finally, could you give us two tunes: one all-time classic track, and something mind-blowing you’ve recently discovered?

I never get tired of those early Nugroove records like Bobby Konders – Poem.

My favourite electronic release in 2018 was probably Loidis – The Floating World (& All Its Pleasures). It’s a pseudonym of Huerco S.

Tommy B talks lyrical inspiration, Lord of The Mics and his recent Devlin collaboration

Tommy B is at the forefront of a new generation of MCs revolutionising the UK grime scene. Spitting since nine years old,…