Last week, the underground dance music community were all aflutter with news of a new high-end DJ mixer, developed by audio equipment company Isonoe in partnership with Floating Points. Isonoe’s managing director, Justin Greenslade, gives us the inside story on the FP-Mixer – and why dance music lovers should care about it.

I was introduced to Sam [Floating Points] by Patrick Forge – a long-standing client of mine. One time Patrick was coming over to me to sort his turntables out or whatever it was, and he said “I’ve got this chap who’s gonna come over with me and check out some of your equipment. Is that OK?” I said “OK”. So Sam came over and he turned around to me and said “look, I’d like to get a mixer made that has the same kind of quality as what I have in my studio.” 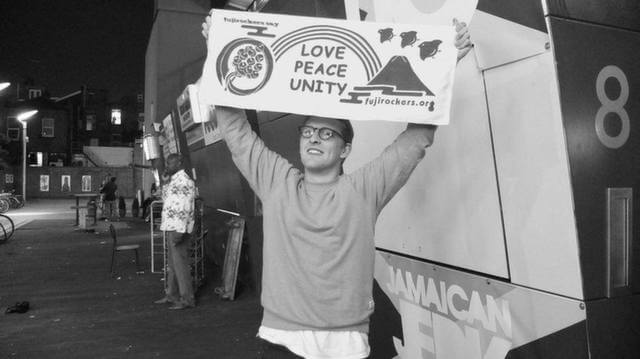 If you know Sam or you’ve been to his studio, you’ll see that he’s into proper studio equipment. The funny thing about DJ equipment is that what’s considered industry standard in the studio world is considered madly exotic in DJ equipment terms. If you distill what we’ve done with Sam’s mixer, it’s a fairly similar thing to a Neve 1073 pre-amp – it uses very similar technology. It’s the kind of thing you find in mastering studios.

If you’re in a recording studio or in the mastering world, you’re spoilt for choice. There’s all kinds of lovely hand-built equipment that you can get. He couldn’t find that in the DJ world. So Sam wanted to do something that was like having a classic Neve console but for DJ purposes. I demonstrated the isolators that you see in the mixer and the equaliser and the pre-amps, and we compared it to various other mixers. He said “can you make me a mixer that has all these features?” I wanted it to be something that wouldn’t be out of place in a mastering room. 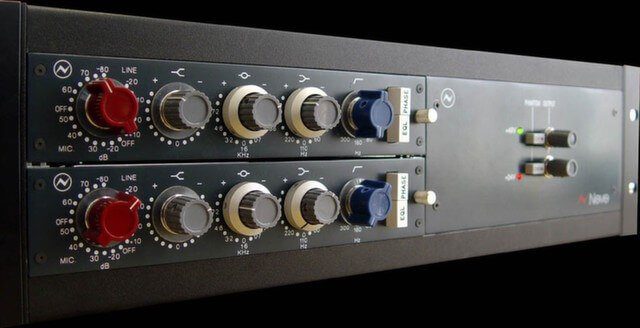 The components that are in Sam’s mixers are sourced from the same companies that make mastering equipment. And because it’s got these lovely big tactile RCA 1960s-style knobs, it’s very ergonomic – so you can mix with it pretty much as sharp as anybody could mix with slide mixers. People tend to define rotary mixers as being higher quality. And I’ve got to tell you, there’s no technical reason why a rotary mixer should be higher quality. As a rule they tend to sound better than mixers that have slide faders simply because of the ideology behind them. They tend to be a bit more bespoke and don’t have all the bells and whistles that tend to be in modern mixers. 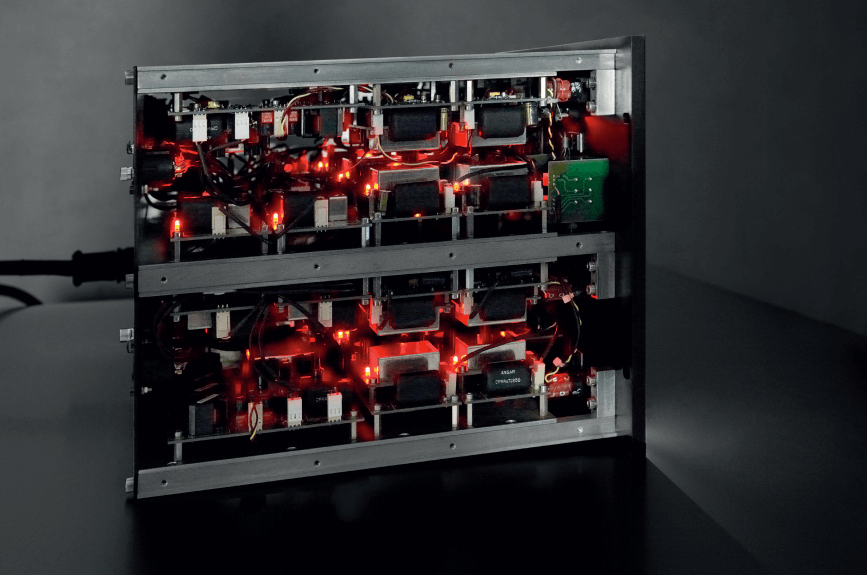 The FP-Mixer from the inside

Most DJ setups have a single isolator, meaning the DJ cuts / boosts the bands of the whole mix. In the case of the FP mixer, there are two isolators. This means that the DJ can, for example, blend the bass from one record with the hi-hats from another. This takes a lot more skill than just killing frequencies with one isolator. Two isolators offer – in my opinion – far greater options for creative mixing. The isolators (and EQ) in the FP mixer can be bypassed however, so if you’re a real purist, the sound will only pass through 3 stages (preamp, summing, output). 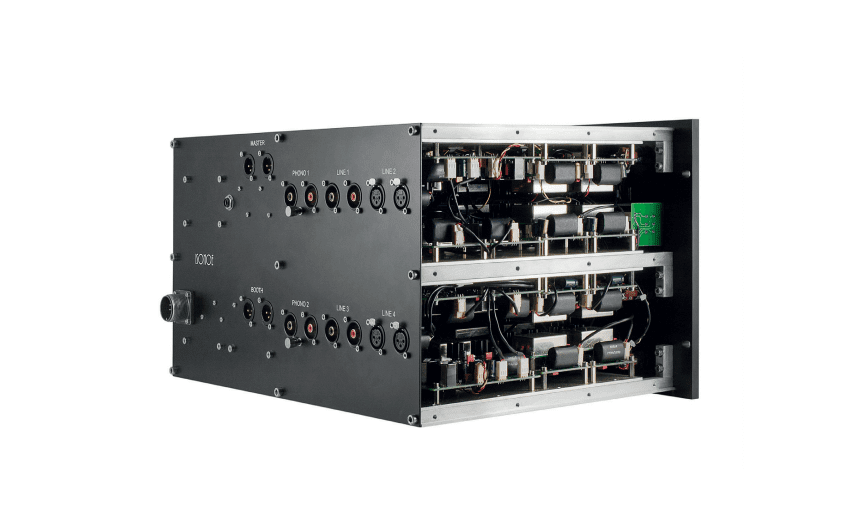 The FP-Mixer: rear and side view

If you hear Sam’s pressings, you’ll know he’s very fussy about who masters them, and if you hear him play out you’ll know he likes to play a lot of classic ‘70s and ‘80s material – and a lot of it sounds great. It was recorded on 2-inch reels, and it seems kind of a shame that you’ve got this fantastic recording to stick it through pretty mediocre circuitry – which is unfortunately the case in the vast majority of DJ equipment. It might read like a marketing brochure, but every specification on the FP-Mixer is there for a reason, and it’s something you can measure with test equipment. It’s something you can hear – if you’ve got the ear for it.

I think the technology in Sam’s mixer is radically different to anything I’ve ever seen in a DJ mixer. However, in the realms of studio and mastering equipment, it’s not that radical. Guys like Rupert Neve and Tim de Paravincini have been making that kind of equipment for decades. So I think a good summary is to think of it in those terms. Why shouldn’t the DJ have that quality or type of equipment? 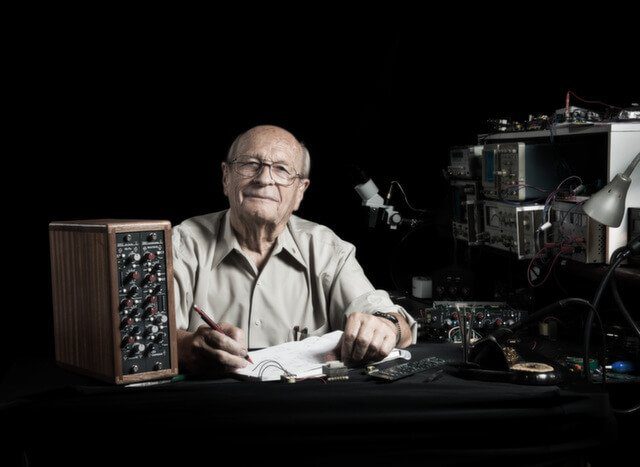 Working in the electronics business, I’m pretty sick of speaking to people in the industry and they look down their noses at DJs and they’re “well everybody’s drunk, no-one really gives a crap” – and that’s not really the case. I don’t move in those circles. My personal friends happen to be very serious about the kind of music they listen to and the quality they hear, and they don’t go out to get blind drunk – they go out to listen to music. When you pay to get into a club, you should have something spectacular quite frankly. You should have something that sounds better than your home hi-fi, because you’re paying bloody £20 to get into the club! And how often do you get that, frankly?

One of the reason it’s a joy to work with people like Sam or Mr. Scruff, is that you go to the set up with Scruff for example and he turns up in the morning, and he’ll spend the day going around the entire venue with his engineer listening to the soundsystem in every different part of the dancefloor, because he’s really bothered about the experience that the people go to his night have. Sadly, I guess that flies in the face of a lot of what goes on in clubland – that thing of being condescending towards people’s ability to appreciate sound. Something I’ve noticed is that when a club gets a better system, they stay busier later. If you get fatigued ears, you don’t hang around. 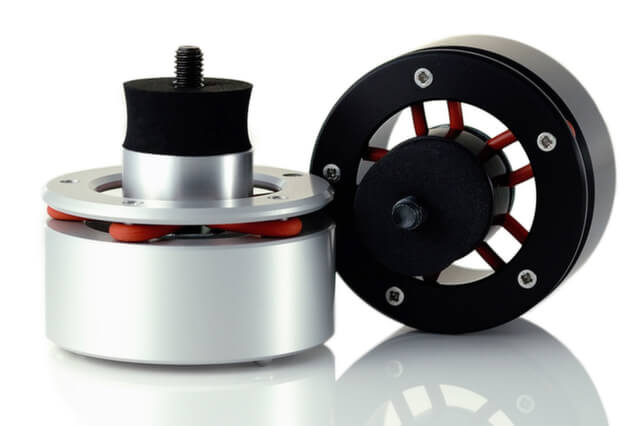 Isonoe’s Audio Isolation System, another of its products

I guess what I’ve noticed with the comments on the internet is that some people argue that it’s overkill, and they’re saying “who’s going to to know the difference?” They’re only saying that because they haven’t heard what people in studio and mastering rooms have. If you’re going to master it with that quality of equipment, why would you then want to downgrade to something else?

We’ve been approached by a few clubs. The FP-Mixer will be putting in an appearance at clubs other than Plastic People.