Champion boxer Amir Khan has joined Wise in the jungle, where he’s already causing a stir.

Last week we revealed that MN2S star Dennis Wise was signed up to appear on I’m A Celebrity, Get Me Out Of Here – but he’s not the only one!

Who is Amir Khan?

The UK’s youngest ever Olympic medallist, since turning professional Khan has won an impressive 31 of his 35 fights. Originally hailing from Bolton, he’s also dedicated much of his life to philanthropy, raising funds in the wake of the 2004 Indian Ocean tsunami and taking aid to refugees stranded in Calais.

He’s reported to be one of the highest paid celebrities ever to enter the I’m A Celeb jungle, beating even the sum paid to Katie Price for her infamous appearance on the show in 2004. The boxer entered the jungle on Sunday 19th November and quickly became one of the hot favourites to win the show.

Other celebrities in the jungle this year include the aforementioned Dennis Wise, a footballer, as well as Georgia Toffolo of Made in Chelsea, Boris Johnson’s father Stanley Johnson and Hollyoaks actor Jamie Lomas, amongst others.

Khan has already raised eyebrows, with some accusing him of faking a fear of snakes. The 30 year old chickened out of a bushtucker trial involving snakes after claiming to be terrified of the creatures, but fans dug up a photo of him posing with a python in 2011. 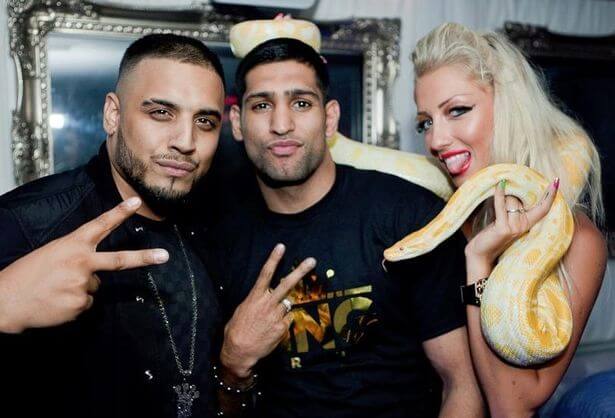 The owner of the snake pictured corrected the rumour however. Georgie Leahy said: “I do remember he was scared – he doesn’t look it in the picture. You can tell Slinky really likes him because he’s got his tongue out. Slinky was really excited to meet him. Most of the time because Slinky loves me so much he’d come back to me, but in this picture he’s going right for Amir!”

Khan is now one of the show’s frontrunners, with Ladbrokes putting his chances of a win at 6/1. If you’d like to book this potential King of the Jungle for an event you’ve got planned, contact top talent agency MN2S to find out more.