Coronation Street vs Eastenders: Which is better?

We take a look at the biggest soaps on British television.

Sure, Eastenders and Coronation Street aren’t the only soap operas on British TV, but they might as well be. Hollyoaks, Emmerdale, Neighbours and Holby City all pale into comparison next to the grandees of TV drama that are Coronation Street and Eastenders. Both programmes have millions of fans, and few people profess to love the two equally – but which one comes out on top in a side by side comparison?

How old are they?

While it may seem like both Corrie and Eastenders have been around since the dawn of time, it’s just not true. While Coronation Street recently marked its 50th anniversary on the air, Eastenders is a mere 32 years old. Coronation Street is the longest running TV drama in the world, not just in the UK.

Where are they set?

Both Coronation Street and Eastenders are set in suburban locales, which are perfectly suited to the ‘kitchen sink drama’ style that they were originally created in. While Coronation Street’s fictional backstory places it in Weatherfield, a non-existent suburb of Salford, Eastenders is set as the title might suggest in a made-up borough called Walford, in the East End of London.

Both locations have their benefits and drawbacks – while Eastenders has a perhaps more metropolitan feel thanks to its setting in the capital, Coronation Street may appeal to viewers in less urban areas exactly because it doesn’t have a metropolitan feel.

The Queen Vic vs The Rover’s Return

In both Coronation Street and Eastenders, the local pub has a starring role in almost every drama that occurs. Eastenders’ Queen Vic is where Den served Angie with divorce papers, and was later murdered by Chrissie. It’s also the notorious pub that Phil Mitchell burned to the ground in a drug-induced rage, and where Mick discovered that his sister, Shirley, was actually his mum. 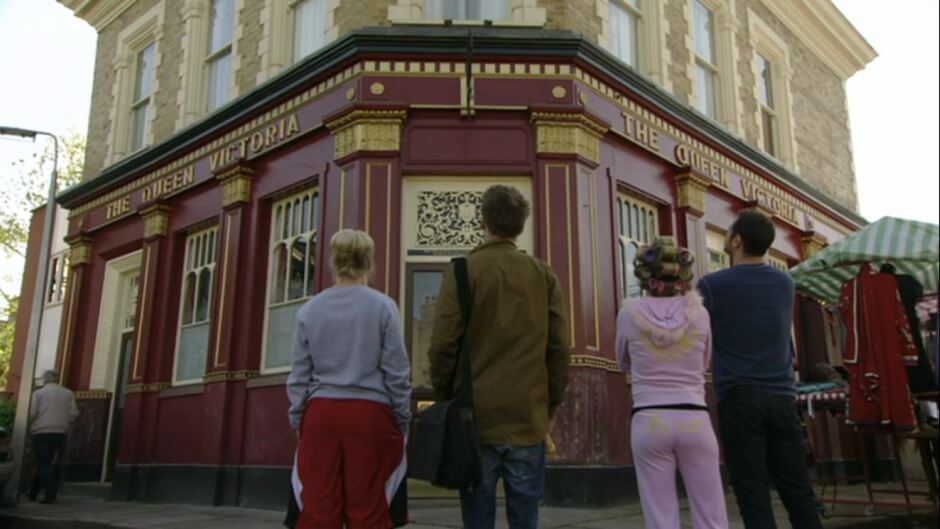 Meanwhile, Rovers’ Return on Coronation Street has also burned down (in an electrical fire) and crashed into by a lorry – not to mention the flirting, fights, weddings and funerals which have taken place in both establishments.

No soap opera would be complete without the odd murder, and both soaps have seen more than their fair share of gory deaths over the years. Murder mysteries and serial killers have formed important plot points – who could forget the mystery of who killed Lucy Beale on Eastenders, or the murder of Archie Mitchell? Meanwhile, Coronation Street has sometimes seemed more like Midsomer Murders, what with the Richard Hillman serial killer storyline and the tragic death of Tina McIntyre.

Soap operas are well known for their ability to bring sensitive and taboo subjects to national attention – you only need to look at the recent Corrie storyline about child sexual exploitation to see how cutting edge soaps can be. Coronation Street also had the first transgender character on TV, and has tackled similar topical issues like teenage pregnancy and assisted suicide which have sparked national discussions.

Eastenders is no different; it’s addressed things like mental health problems, domestic abuse and HIV in ways that make them accessible to the public – and both shows should be applauded for that.

It has to be said, that any resident of Albert Square or Coronation Street who decides to risk leaving the house around a British bank holiday is a brave soul indeed. Soap operas, always keen to boost their viewing figures, often feature dramatic incidents around Christmas.

From car crashes and murders to fights, weddings gone awry and much more, the festive season brings more doom and gloom than holiday cheer to soap opera land.

With Coronation Street and Eastenders level-pegging on so many fronts, it’s just too tough to choose which one comes out on top. Both soaps have their upsides and downsides, and while dedicated followers will no-doubt be set in their ways, we think they’re both as good as each other.

Soap operas are amongst the most watched TV shows in the UK, and with so many people feeling like they know their favourite soap actors they can be a great choice of celebrity guest. Here at MN2S celebrity talent agency we have some of the UK’s most talented and recognisable actors on the books. Whether it’s a presenter for an event, an endorsement for a product or a personal appearance, they could be just the ticket. Get in touch with our friendly team to find out more about what we can help you with.