RuPaul Andre Charles, famously known as RuPaul, is an award-winning actor, model, singer, television presenter, author and without doubt the most successful drag queen of all time.

As an internationally successful recording artist, Rupaul has collaborated with likes of Elton John and recorded 14 studio albums to date. A global superstar, he has also starred in countless TV shows and movies, hosted his own chat show and became the first drag queen to become a spokesperson for a major cosmetics company, after MAC chose him to front their Viva Glam line. RuPaul is the host of global hit reality TV show RuPaul’s Drag Race, with many crediting the show’s success to RuPaul’s talent as host and star presenter.

RuPaul began his career performing at clubs in Atlanta before making a splash in New York during the 90s, where his larger-than-life personality and appearances at nightclubs and festivals such as Wigstock earned him the nickname ‘Queen of Manhattan’. In 1993 he released his first album, Supermodel of the World: lead single ‘Supermodel (You Better Work)’ became a global success, dominating dance charts and winning the Best Dance Music Video award in the 1993 MTV Video Music Awards.

RuPaul’s star began to rise rapidly and he soon landed a modelling contract with MAC Cosmetics, hosted his own chat show on VH1, and acted in numerous hit movies and TV shows including The Brady Bunch Movie (1995), To Wong Foo, Thanks for Everything! Julie Newmar (1995) and Broad City (2017).

A true icon of pop culture, RuPaul brought the subculture of drag into mainstream American television with his reality show RuPaul’s Drag Race – the show has been running for 11 series and shows no sign of slowing down. With an illustrious career that has spanned 35 years so far, this multi-talented star continues to shine. 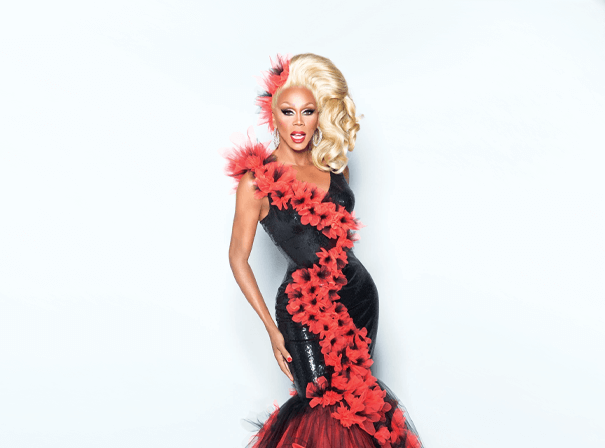