The scorching, motivated, and dedicated musician Christopher Smith Jr., is better known by his stage name, Smino. An incredible and unique rapper, he is also a member of the hip-hop supergroup Zoink Gang, and part of the supergroup Ghetto Sage. He is a founder and part of a musical collective and record label called Zero Fatigue. Away from music, in 2018 Smino unveiled his design of satin-lined hoodies called “Silk Pillows”, named after his song of the same name. He also hosts an annual Christmas concert and fundraising event called Kribmas in his hometown of St. Louis.

Born and raised in St. Louis, Missouri, Smino comes from a musical family. His father is a keyboardist, his mother a singer, and his grandfather played with the blues legend Muddy Waters. After graduating from High School, and shortly after releasing his first solo mixtape, Smeezy Dot Com, in 2012, Smino moved to Chicago to pursue a music career. He met engineer Chris “Classick” Innumerable at Columbia College Chicago and the pair set up the music collective, Zero Fatigue. In 2015 Smino released his first EP, S!Ck S!Ck S!Ck. Following the release of his second EP, Blkjuptr, and after working with fellow artists in the studio and on tour, Smino released his debut solo album, blkswn, in 2017 to great critical acclaim. His second studio album, NØIR, came out in 2018, followed by a global tour. In 2019 he announced the creation of the supergroup Ghetto Sage with Saba and Noname, and released a single, Häagen Dazs. Following a solo two-song EP titled High 4 Da Highladays, Smino released his second solo mixtape, She Already Decided, in 2020. His latest solo track, Rice & Gravy, was released in May 2021.

Smino regularly connects with his millions of followers and fans through Instagram, Facebook, and Twitter, posting pictures and videos of his life around music. He has a dedicated YouTube channel, Smino, and two official websites, zerofatigue.com, and smitransfer.com. 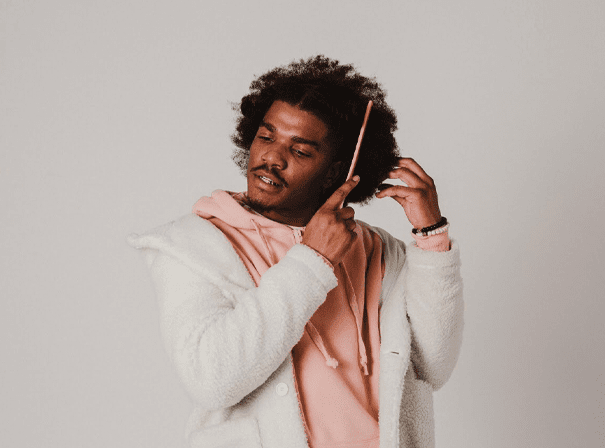