After a car accident paralyzed Amberley Snyder from the waist down, she didn’t stop her passion for horseback riding. Her experience inspired her children’s book and Netflix biopic, Walk. Ride. Rodeo.

When she was seven, Snyder began competing in barrel racing, breakaway roping, goat tying, and pole bending—a category that led her to the National High School Finals and a world championship title. Upon graduation, after many years of being a member of the Future Farmers of America Organization, she was elected president for the Utah FFA region. But when she was driving on her way to a race, she glanced down to look at her map, leading her to an accident that resulted in a T11-T12 spinal cord injury.

Four months later, Snyder began riding again, strapped to her saddle. When she attended Utah State University, she was voted captain of its National Intercollegiate Rodeo Association. Her story inspired thousands, earning her a spot as the fan exemption contestant at the American Rodeo: the most prestigious horse racing competition in the country. She finished .6 seconds behind the winner and received a standing ovation from over 40,000 fans. Since, she won the Women’s Professional Rodeo Association Card, was in the Top 5 in the Rocky Mountain Pro Rodeo Association, and still competes in the RAM Wilderness Circuit to this day.

Outside of racing, she’s shared her story to top news outlets like People Magazine, NBC Nightly News, and The Today Show, to her 300K+ fans on both Facebook and Instagram, and continues to inspire others as a motivational speaker, even speaking at the National FFA Convention in Costa Rica in front of 13,000 children. Now, she’s focusing on finalizing her charity, The Amberley Snyder Freedom Foundation. 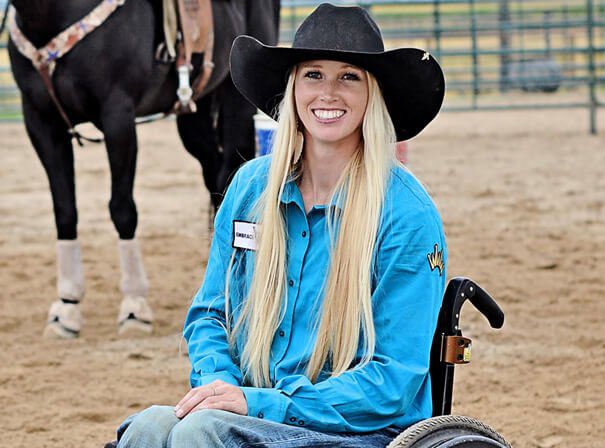