Buzz Aldrin, often known as ‘Buzz’, is a world famous former astronaut, engineer and fighter pilot. Aldrin is widely recognised for completing three spacewalks; in 1966 he was pilot of the Gemini 12 mission and following that, in 1969 he was pilot on the Apollo 11 mission. He and fellow mission commander, Neil Armstrong, were the first humans to land on the Moon. Aldrin has been decorated with several awards, including the Congressional Gold Medal in 2011 and he has also published eight books, including the New York Times bestselling ‘Magnificent Desolation’ (2009).

Upon graduating with a mechanical engineering degree, Aldrin began his career as a fighter pilot when he was commissioned into the United States Airforce. Aldrin had an impressive career as a fighter pilot, flying in 66 combat missions in Korea, shooting down two MIG-15’s and being subsequently awarded the Distinguished Flying Cross. 1963, Aldrin was selected by NASA for the third group of astronauts, making Aldrin the first astronaut with a doctoral degree. Aldrin is famed for completing the world’s first successful spacewalk in 1966 prior to his pre-eminent landing on the Moon with Neil Armstrong, a record breaking 600 million people witnesses the making of history on television.

After leaving NASA in 1971, Aldrin has carried on leading the way for developments in human space exploration, devising mission plans to Mars. Aldrin has founded various companies and organisations, namely Starcraft Boosters Inc, Buzz Aldrin Enterprises and Buzz Aldrin’s ShareSpace Foundation, which is a non-profit organisation devoted to improving science literacy for children. 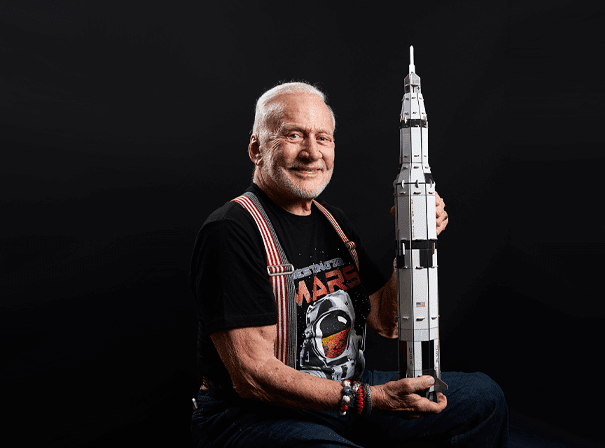