Ellie Robinson MBE turned 20 in August 2001. By that time, she had already been decorated by the Queen, named BBC Young Sports Personality of the Year, won gold at the Paralympics and Commonwealth Games, and established herself as a regular podium presence at the IPC Swimming European Championships. She holds the world records in both the S6 50m and 100m butterfly, both of which she set when she was 13 years old. In October 2001, she made headlines when she announced her retirement from swimming. Today, she is focusing on her work as a history student and emerging writer and presenter. She has a growing social media presence of around 20,000 followers across Instagram and Twitter.

Robinson hails from Northampton. She was born with a rare form of dwarfism and was later diagnosed with a hip disease called Perthes, which requires daily physiotherapy. She began learning to swim when she was four years old and, in 2014, joined British Swimming’s elite World Class Podium Potential programme. She made her international debut the following year and set a new 100m world record at the event. At her first major international tournament, she walked away with an incredible four medals. This was soon followed by gold and bronze at the Paralympics in Rio. She was deservedly named Young Sports Personality of the Year and made an MBE in early 2017.

In 2018, Robinson won a gold medal at the Commonwealth Games on the Gold Coast of Australia and the European Championships in Dublin. Whatever she does next, her reputation as one of the great British paralympians is assured. 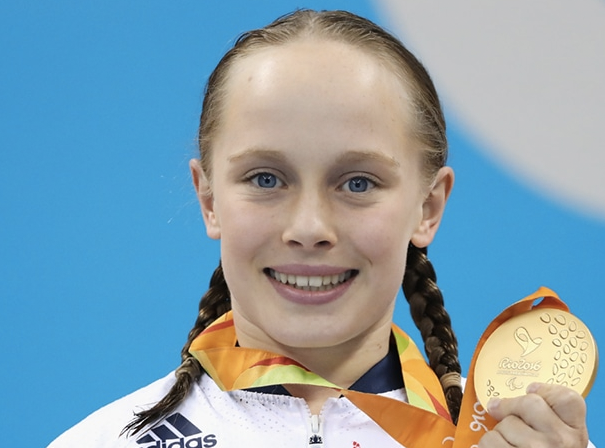