Emmanuel Petit. Frenchman Emmanuel Petit is a former world class footballer. Now retired, he turned out for top flight teams such as Monaco, Arsenal, Barcelona and Chelsea. He was a handy midfield player with lots of flair and he wen ton to play for France at international level in two FIFA World Cups and two UEFA European Football Championships. Chief amongst his career highlights was a goal in France’s 3-0 victory in the 1998 FIFA World Cup Final, while he was also a part of the team that won the UEFA Euro 2000.
In all he won 63 caps for France and scored 6 goals, while domestically he played 385 games and scored 16 times. Monaco was where he stayed the longest, though British fans also remember him well from his spells with Arsenal and Chelsea. Emmanuel is a popular pundit on TV and regular appears on French sports shows. He has always played in number 17 and in 1998 he was playing slot machines in a Monte Carlo casino when he wont 17, 000 euros in francs. He donated it all to charity, and has also shaved off all his hair for charity before now. He is now an ambassador for UFX.com and appear sin adverts for them, alongside fellow ambassador Mike Tindall. Emmanuel has written a biography that talks about the sad loss of his brother on the field during a football game. Emmanuel Petit, then, is a stand sportsman with many stories and experiences to share. 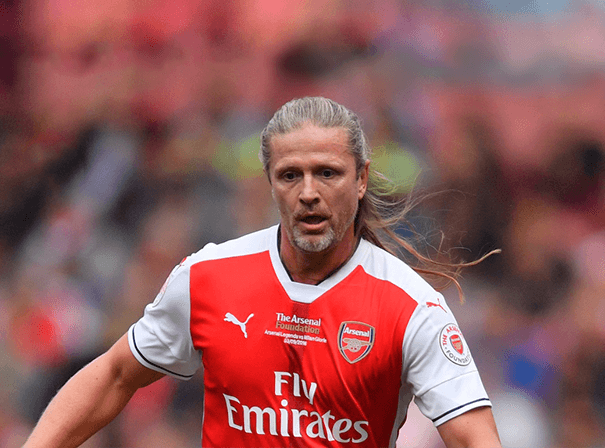