Floyd Mayweather is one of the boxing world’s most iconic figures. During his illustrious career, he’s won Olympic medals, national championships, and countless accolades, holding multiple world titles in five weight classes before retiring in 2015 with an undefeated record. Ranked by ESPN as the greatest boxer of the last 25 years, he remains BoxRec’s No. 1 fighter of all time, and the greatest welterweight in history. A formidably powerful hitter with technical mastery, Mayweather has been described as the best defensive boxer in the history of the sport, and one of the most accurate. An undisputed champion that’s defeated almost every major player in contemporary boxing, he has a record of 26 consecutive wins in world title fights. Though retired, Mayweather occasionally returns to engage in spectacular one-off fights that receive global attention – his 2017 match against MMA fighter Conor McGregor earned him over $300 million, drawing a worldwide audience of millions.

Topping both Forbes’ lists of highest-paid athletes and highest-paid celebrities in 2018, Mayweather is undoubtedly one of the world’s most successful figures – not only in sport, but the business and entertainment worlds too. His prowess in the ring is matched equally by his business acumen, effortless charisma and sheer star power, qualities that have made him one of America’s best-loved faces, recognised worldwide as a herculean figure, commanding respect and admiration from all corners of the globe. 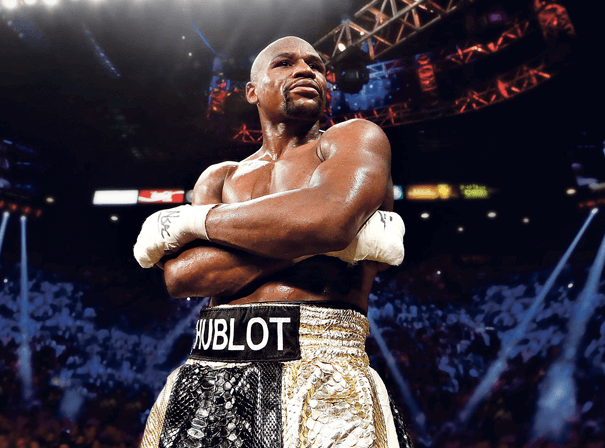