Gail Kim-Irvine is a former professional wrestler from Canada. Kim was ranked the number one female wrestler in the world by Pro Wrestling Illustrated in 2012, and she was inducted into the TNA Wrestling Hall of Fame for the first time in 2016. Kim is regarded as one of the greatest wrestlers of all time and was dubbed “the greatest Knockout ever” by former Knockouts Champion ODB.

Kim started her wrestling career on the independent circuit in Canada and the United States before entering WWE in 2002. In her debut match, she became the first WWE Diva to win a championship. She’s famous for her two appearances in World Wrestling Entertainment (WWE), where she captured the WWE Women’s Championship in her first match.

Kim joined TNA in September 2005. She worked as a valet for the tag team America’s Most Wanted. Kim went on to wrestle as a singles wrestler, winning the TNA Knockouts Championship for the first time in October 2007. She had an acclaimed rivalry with Awesome Kong in TNA, which is widely regarded as one of the best women’s wrestling feuds of the 2000s. Also that year Kim was listed on Forbes’ top 40 list of “America’s Most Eligible Bachelorettes.” She’s a seven-time Knockouts Champion in Impact Wrestling, which is a record.

Kim has since retired from the world of pro wrestling but remains active in the scene and is signed to Impact Wrestling as a producer. Kim, Lita, and Christy Hemme launched “KAYfABE,” a new wrestling show based on true events that mixes scripted action with pro wrestling, in March 2020. Kim connects with her multitude of fans via her Instagram where she boasts over 221 thousand followers. 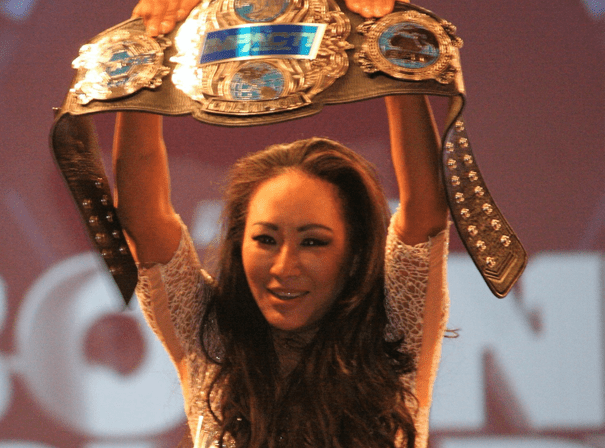