Considered by many to be the greatest chess player of all time, Garry Kasparov was for two decades ranked world No. 1, and smashed multiple records. Since retiring from competitive chess, Kasparov has become a dedicated Russian pro-democracy activist, and is today the Chairman of the Human Rights Foundation and the founder of the Renew Democracy Initiative.

Born in the former Soviet Socialist Republic of Azerbaijan, Kasparov was a chess prodigy in childhood, and won the Soviet Junior Championship aged just nine. He later studied under International Master Vladimir Makogonov, and became the youngest person ever to qualify for the Soviet Chess Championship at 15. Over the following years, his World Chess Federation rankings continued to climb. He became the youngest ever world No. 1 in January 1984, and became the youngest ever World Chess Champion the following year in a win over Anatoly Karpov. Across his career he would go on to score a record 15 consecutive professional tournament victories, 11 Chess Oscars, and be ranked world No.1 for the next two decades.

In 2005, Kasparov announced his retirement from competitive chess, to focus on his writing and political work. He formed the United Civil Front movement, is the Chairman of the Human Rights Foundation and the chair of its International Council, and is the founder of the liberal democracy platform the Renew Democracy Initiative. He has written several books, including the five-volume My Great Predecessors series, the Modern Chess series, and Winter Is Coming: Why Vladimir Putin and the Enemies of the Free World Must Be Stopped.

He consults for companies seeking to enter the Russian market, and speaks across the world. Applying the principles gleaned from his chess supremacy to the worlds of business and politics, he speaks on strategy, competition, logical thinking and achieving your potential. 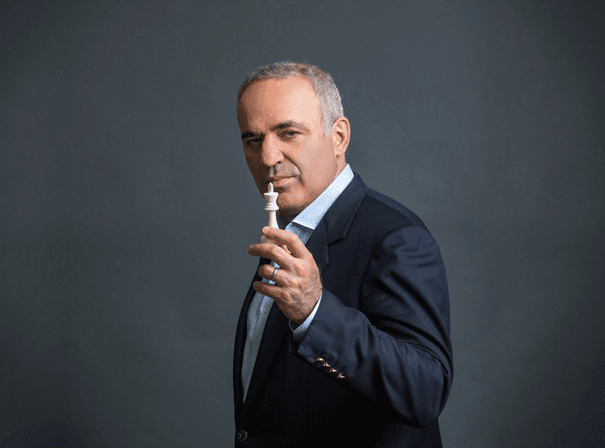