Italian footballer and manager Gianfranco Zola is known for his creative and skilful play on the pitch and as a successful and thoughtful manager. His football career started playing mainly for Italian clubs including Palma and Napoli, where he played alongside Diego Maradona. A move to Chelsea for £4.5m in 1996 saw his first appearance for English football and marked a successful start with the London club which included 80 goals, the UEFA Cup Winners Cup and two FA Cups. A popular fixture on the team at Chelsea – thanks to his supposed “magic boots” – Zola was twice named Player of the Year and included in the club’s Centenary XI team in 2005. His extraordinary back-heel flick from a corner has gone down in history at Stamford Bridge as one of the team’s finest moments.

Zola played 35 times for his national side of Italy, making appearances in the 1994 World Cup and in Euro 1996. His managerial career included time with the Italian Under-16s, West Ham United, Birmingham City, and Watford, and he was recognised as Championship Manager of the Month in 2013. Most recently he served as assistant coach for his former club Chelsea alongside countryman Maurizio Sarri, before stepping down in 2019.

Zola’s impact on Italian and English football cannot be underestimated. Awarded an honorary OBE in 2004 for his contribution to English football and ongoing charity work, Zola was described by the British Embassy in Rome as “the most enduring and popular foreign player in history of Chelsea”. 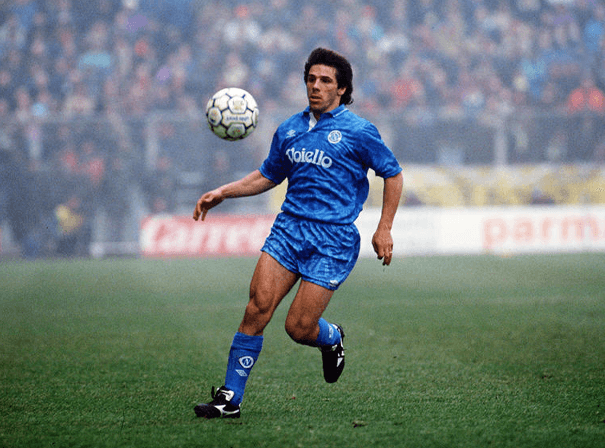