Hard-hitting Jeremiah Clifford Stratton is an American rock drummer also known as Trauma and best known for bashing the skins in the genre-tripping rock band Hed PE, whom he joined in 2009. He has played on their last five albums, including Truth Rising, Evolution, and Forever!, all of which made the US Indie Top 25. The band have now been active for over 25 years and continue to play sold-out shows and enormous festivals around the world to this day.

Stratton was born in Mission Viejo, California in September 1983. He got his first drum kit when he was nine years old, coincidentally around the time that Hed PE were beginning to make headway. However, it wasn’t punk-and-rap-infused rock that was Stratton’s original bag, it was jazz. By the time he’d reached his teens, he already had a shelf full of drumming awards from jazz festivals, including Best Solo Artist. After graduating, he stayed around the California scene, mostly playing in cover bands with his step-father. Everything changed when he dialled a wrong number and ended up speaking to a member of Hed PE. That wrong number changed everything. In 2009, he became the band’s sixth drummer, and is now the longest-serving drummer they’ve had, outlasting founding beat-keeper BC Vaught.

Hed PE are best remembered for their early 2000s rock singles like ‘Bartender’ and ‘Blackout’ but they can still pack a mean punch today, especially with Stratton providing the blistering beats and backing vocals. It turns out that wrong number was the right one after all. 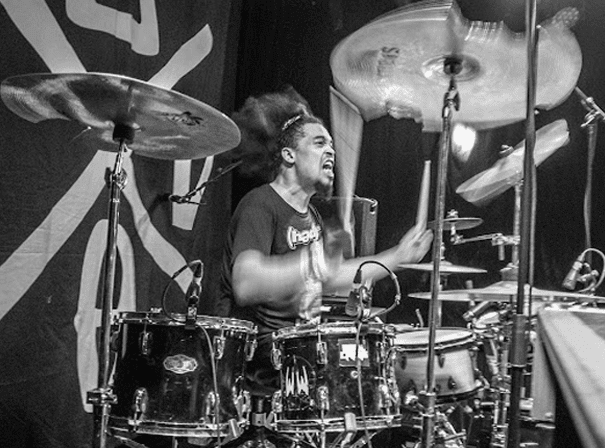