Drummer, musician and activist Jess Bowen is an original member of the fabulous pop rock band, The Summer Set, a group she started up along with her brothers, Stephen and John Gomez, and lead singer Brian Dales. Bowen later went on to form the indie band, Twin XL. She also keeps rhythm and timing for Alice Glass, Tessa Violet, Nekokat, Marshall and 3OH!3.

After giving drum lessons through Band Happy on Warped Tour in 2014, Bowen began to find that many of the girls who signed up to learn just wanted to talk to her about the struggles they were having trying to make it in the music industry. So, along with Meg Frampton of rock band Meg & Dia, Bowen set up the intimate speaking panel, Speak Up, in which the duo shared their own experiences as women in music. It wasn’t long before Bowen was being hailed as a role model, offering advice, tips and some hard truths. Bowen now co-hosts the weekly podcast Babes Behind The Beats on Idobi radio with DJ, singer and songwriter Bowie Jane, a show which focuses on fellow females in the music industry.

She is busy on social media regularly engaging with her huge fanbase, and currently boasts some 67,000 followers on Twitter, and 63,000 connects on Instagram. She is also open to personal messages offered on the Cameo platform. 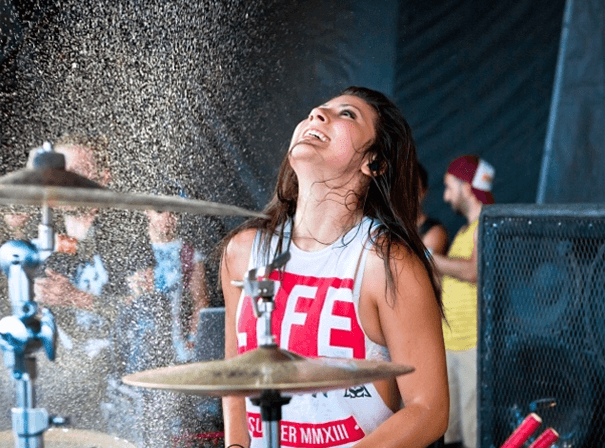