A relatively young talent in the sportcasting arena, Julie Dobbs is a popular freelance sports reporter and producer based in Dallas, Texas. She currently keeps busy working for Fox Sports Southwest (or FSSW for short) as a producer, editor and reporter for ‘Stars Insider’, a magazine show on the NHL team Dallas Stars. On the network she also hosts the weekly segment ‘Southwest Outdoors Report. Other shows she produces and edits for FSSW include ‘In My Own Words’, ‘Spotlight’ and ‘Cowboys Game Night’.

Aside from her work with Fox, Dobbs also works as a freelance reporter at CW33-KDAF based in Dallas. Before landing a coveted slot on FSSW’s programming she was a freelance reporter for TXA21, helping with their Friday night baseball coverage of the Texas Rangers from 2010-2011. At TXA21 she was the live in-game reporter for all Texas Rangers games, also reporting on their pre and post-game shows, covering the team on their path to two consecutive American League titles. Prior to that she covered the 2007-08 NFL season working as part of the Dallas Cowboys broadcast department, conducting regular interviews with the Cowboys coaches and staff. During this time she was also a radio host for all of the shows on the Dallas Cowboys Radio Network.
A journalism graduate with a specialism in sports broadcasting, Dobbs is a passionate sports enthusiast who has made impressive strides in her career despite her youth. She’ll continue to use her natural on-screen charisma and deep sporting knowledge to propel herself further in the sportscasting profession. 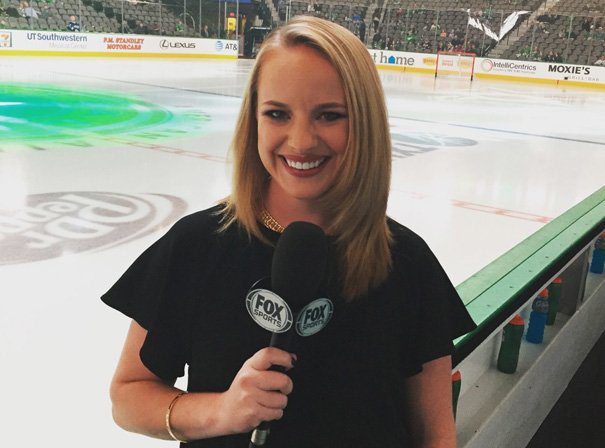