25 Years of Incredible: General Levy touring in celebration of jungle’s most iconic track 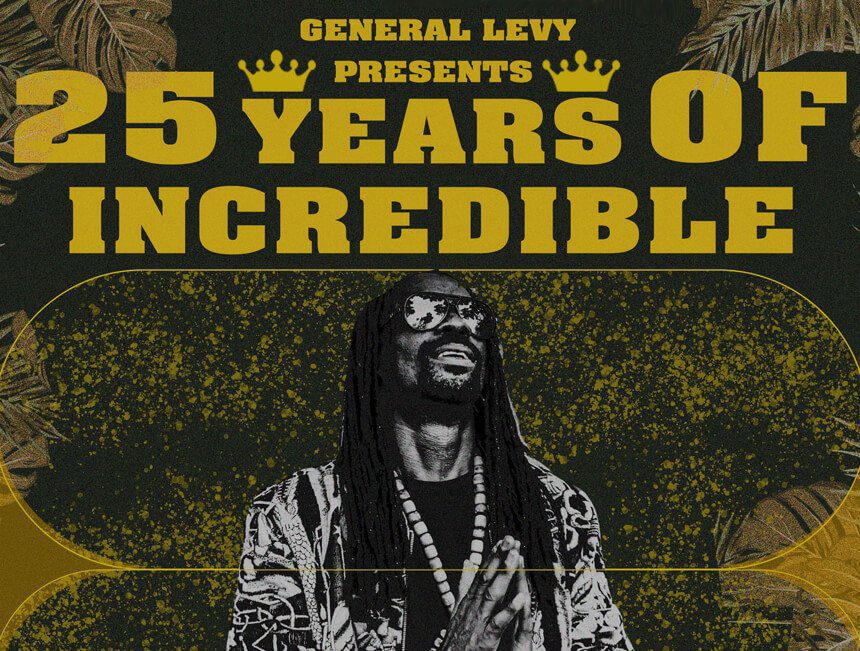 If you haven’t heard the words “wicked, wicked, junglist massive” – where have you been for the past 25 years?

General Levy’s genre-defining track “Incredible” was released 25 years ago this year, and he’s heading out on an incredible tour to celebrate with jungle fans across the UK and beyond. Don’t miss out.

General Levy is kicking off a European tour surrounding the anniversary of his most famous tune, “Incredible”. Taking The General’s incendiary live show to ten cities across the UK and several European hotspots, with support from rising reggae artist and Mad Professor’s protégé Joe Ariwa, this historic tour has jungle fans across the continent buzzing. Check out the full list of dates below.

Produced by M-Beat and released in 1994, “Incredible” became one of the most recognisable tunes of the decade and played a large part in bringing jungle from the underground into the mainstream after being memorably featured on The Ali G Show and remixed by a host of top producers. After the original hit No 34 on the UK Singles Chart, a remix broke the Top 10 at No 8 and etched the track a permanent place in the musical history books. At 25 years old, “Incredible” remains as popular as ever, a staple of jungle raves, urban radio and house parties across the country. General Levy has since been named by Red Bull as one of “25 UK MCs who changed the game”, who described “Incredible” as “the biggest jungle track ever released.”

The jungle icon has lent his unique vocal flair to new music from two of the UK’s leading urban artists. Man of…