Eli Castro is an energetic, creative and highly original performer, whose comedic one-man shows explore family, culture, language and what it means to be Puerto Rican in modern America. He has garnered critical acclaim for his work, and has been named Best Stand Up at New York City’s United Solo Festival.
Castro was born in Puerto Rico and raised in New York, and his comedy is suffused with this heritage, unearthing a rich mix of culture, tradition and language. But though he was long drawn to performance, his professional life began very differently. After gaining a master’s degree, he worked as a prosecutor and criminal defence attorney, running his own law firm. Over time, his interest in writing and performing won out, and he began to perform to larger and larger crowds until it became his full-time occupation.
Castro performs at theatres across the US, as well as colleges and businesses including GE, GOYA, Yale University and Emerson College. He has created eight one-man shows, that each employ storytelling and comedy to powerful effect. These include the romantic comedy I’m No Romeo, Law & Disorder, Words Cannot Explain, and his exploration of his own identity Made in Puerto Rico, which he has delivered at over 100 sold-out performances and which enjoyed an extended off-Broadway run in 2019. His work has received considerable interest from print and broadcast media and has been featured on The View, Good Day New York, Un Nuevo Dia, LatiNation and WGN-TV. When he’s not on stage, he hosts his own long-running weekly podcast, The Eli Castro Show. 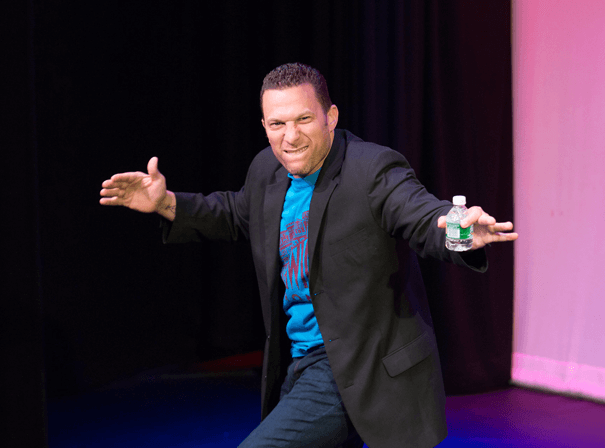