Ashley Iaconetti and Jared Haibon are reality television celebrities who first met on ABC’s Bachelor in Paradise in 2015 and melted hearts when they wed in 2019, but what is notable about them is that, despite meeting on a show about finding love, they didn’t get together on the show; in fact, they didn’t become a couple until three years after they met. Their slow-burning love story has won them countless fans, and their appearance on YouTube series The Story of Us, in which they detail the long road to their romance, has been watched over 2.7 million times.

Even before they’d met, Iaconetti and Haibon had their eye on each other. They had both noticed each other when watching their appearances on separate seasons of hit ABC reality shows The Bachelor and The Bachelorette, in which one man or woman is wooed by a group of potential suitors, each vying to win their heart. Neither found love and so were invited to take part in Bachelor in Paradise, a further spin-off in which unsuccessful Bachelor and Bachelorette contestants are placed on an exotic island in Mexico in the hope of finding love among themselves.

The pair went on a couple of dates on the show, but nothing clicked. In the months after the cameras stopped rolling, however, the pair struck up a friendship that slowly blossomed. In 2016, both turned up again on Bachelor in Paradise, but again nothing happened. In 2017, they appeared separately on further Bachelor spin-offs, Bachelor Winter Games and Bachelor World. Finally in 2018, at a private gathering of former Bachelor contestants, they got together, and have been making people happy with their story ever since. 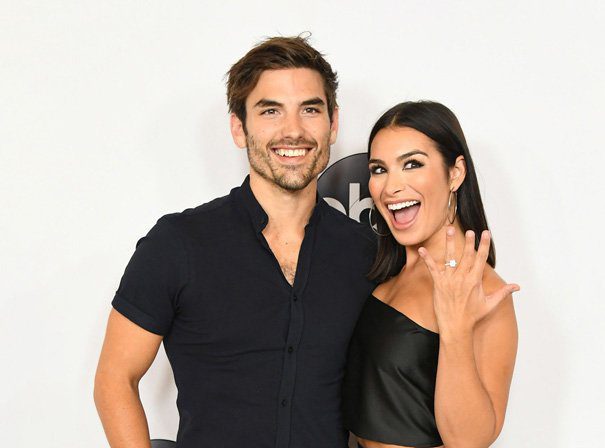