Widely considered the fastest player in NFL history, running back Chris Johnson was famous for torching opposing defenses when he played for Tennessee Titans. In his first three years in the league Johnson was a Pro Bowl selection, and he won the NFL rushing title in 2009 with 2,006 yards becoming only the sixth player to rush for more than 2,000 yards in a single season. His glittering career also saw him play for the New York Jets and the Arizona Cardinals.

Hailing from Orlando, Florida, Johnson was a standout track star at high school and excelled in the 100 metres, and in 2004 he finished second at the Florida 4A state championships behind Walter Dix in the sprinting event. Despite his talent on the track Johnson pursued a career in football and rose to prominence as a senior for East Carolina University where he scored 24 touchdowns and broke out for 2,960 all-purpose yards.

After running the 40-yard dash at the NFL Combine in a then-record breaking 4.24 seconds, he was drafted in the first round of 2008 NFL Draft by the Tennessee Titans, signing a five year $12 million contract. After five impressive years with the team he went on to play for New York Jets and Arizona Cardinals before announcing his retirement from the NFL in 2018 after 10 remarkable seasons, but he signed a one-day contract in 2019 to retire as a member of the club where his professional career began, the Tennessee Titans.

Always ahead of the pack, Johnson is the first NFL Athlete to develop his own supplement brand designed specifically to support innovative workout regimes, based on his own experience with rigorous workouts in the NFL. 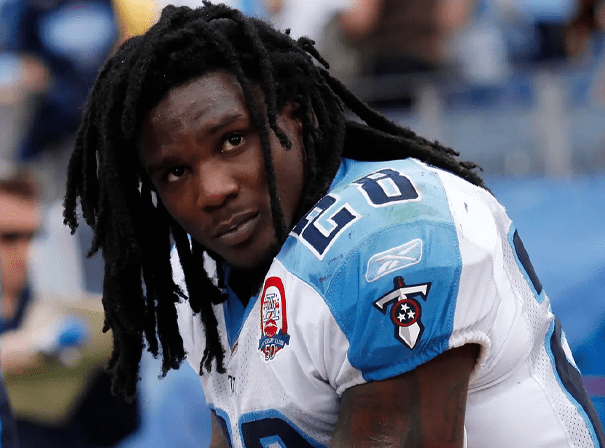