A living legend of the music industry, Rock & Roll Hall of Fame inductee Nile Rodgers is a multiple GRAMMY-winning composer, guitarist, producer and arranger who has worked with many of the greatest artists of all time, including David Bowie, Madonna and Diana Ross. Co-founder of influential disco band CHIC, Rodgers launched a pioneering sound that produced countless hit tracks including ‘Le Freak’ – the biggest selling Atlantic Records single ever. Recently elected as the Chairman of the Songwriters Hall of Fame, he has produced, performed and written music that has together sold in excess of 75 million singles and 500 million albums worldwide.

Raised in bohemian Greenwich Village, New York, Rodgers was exposed to a kaleidoscope of cultural influences which shaped his unique musical style. He formed CHIC with bassist Bernard Edwards in 1970, and their electrifying fusion of funk, disco and soul on catchy tracks such as ‘Le Freak’ and ‘Good Times’ propelled the band to superstardom. The success of CHIC’s tracks allowed Rodgers and Edwards the chance to produce other bands on the Atlantic label, including huge hits ‘He’s The Greatest Dancer’ and ‘We Are Family’ for Sister Sledge.

When the 1980s arrived, Rodgers worked solo as a producer, transforming popular music when he joined forces with some of biggest names in pop, producing David Bowie’s biggest selling album Let’s Dance, Madonna’s Like a Virgin and hit albums for the likes of Mick Jagger and Duran Duran.
In later years, he has produced music for the likes of Sam Smith and Lady Gaga, and also co-wrote and performed on one of the best-selling hits of the decade, Daft Punk’s ‘Get Lucky’. Rodgers also continues to make new music and tour with CHIC, with the band recently wowing audiences at Glastonbury and touring alongside Cher. 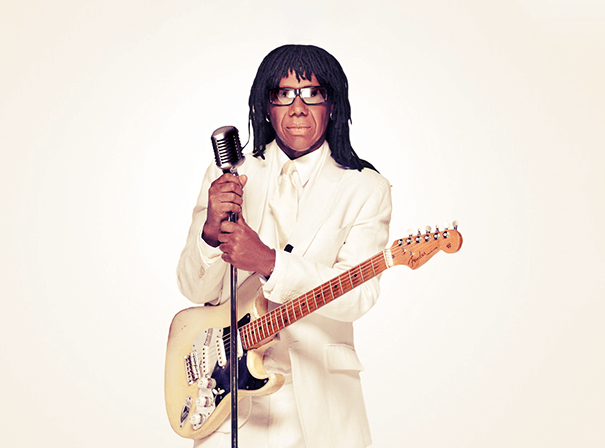