Canadian rock star Shawn Drover is most famous for his work with American heavy metal group Megadeth. He has also been a member of Canadian power metal outfit Eidolon and has been part of American heavy metal super group Act of Defiance since 2014. A prolific songwriter, Drover was the co-writer of the Grammy Nominated Megadeth track ‘Head Crusher ‘ from the band’s 2009 album Endgame.

Hailing from Montreal, Canada, Drover began playing the drums when he was thirteen years old and learned guitar from watching his brother Glen, who also went on to join Megadeth. In 1993 the brothers formed Canadian power metal band Eidolon and released seven studio albums together.

In 2004, Drover replaced drummer Nic Menza in one of the biggest thrash metal bands of all time, Megadeth. Drover arrived just six days before the first show of the band’s Blackmail The Universe Tour, and spent a decade with the group appearing on nine albums and touring the globe. In late 2014 Drover announced his departure from the band on the same day as fellow band member Chris Broderick, and the pair went on to form extreme metal super group Act of Defiance.

Drover has remained with Act of Defiance ever since, and has recorded two albums with the band, 2015’s Birth and the Burial and follow up Old Scars, New Wounds (2017). 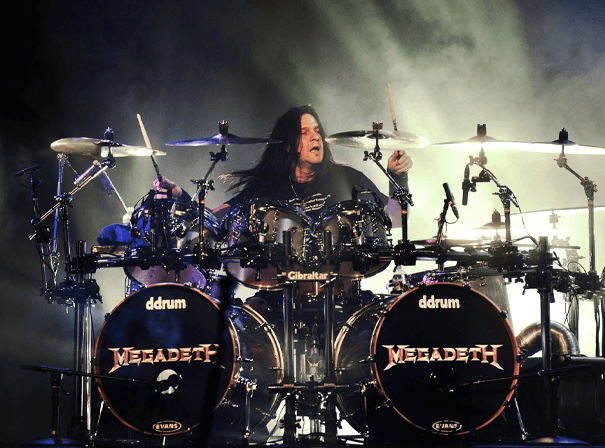