With a name now synonymous with English Soccer Sir Bobby Charlton can be considered as one the greatest players of all time. Included in the England squad for an incredible four World Cups he is best remembered for his extraordinary performance in the 1966 final when his national side won for the first and only time.

Charlton’s career is the stuff of legend, beginning in 1953 playing for the England Schoolboys side and the Manchester United youth team. He remained at Old Trafford for the majority of his playing days making 606 appearances for the team and scoring 199 goals. Between 1958 and 1970 Charlton played for the senior England side an extraordinary 106 times and remained their most capped player for a further three years and is one of the few English players to have lifted the Jules Rimet trophy. He has also won the Ballon D’Or, been named in the FIFA World Cup All Time Team, been inducted into the English Soccer Hall of Fame, was given the BBC Sports Personality of the Year Lifetime Achievement Award and was dubbed a Knight for his services to Soccer in 1994. In 2016 it was announced the south stand at Old Trafford would be renamed in his honour.

After retiring from the game in 1983 Charlton continues to take an active interest in sport, campaigning for British cities to host the FIFA World Cup, the Commonwealth Games and the 2012 Olympics. He also works with his own charitable foundation that funds research into landmine clearance. 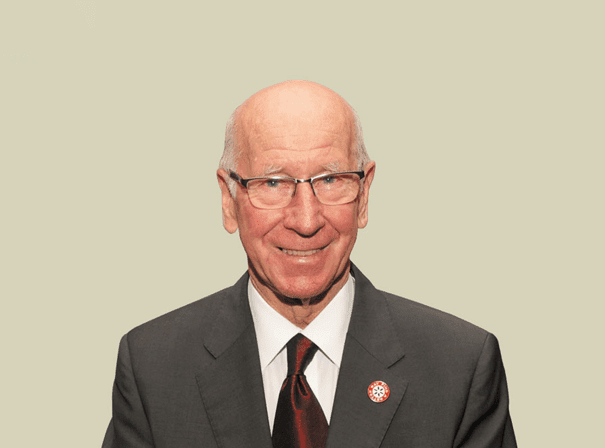