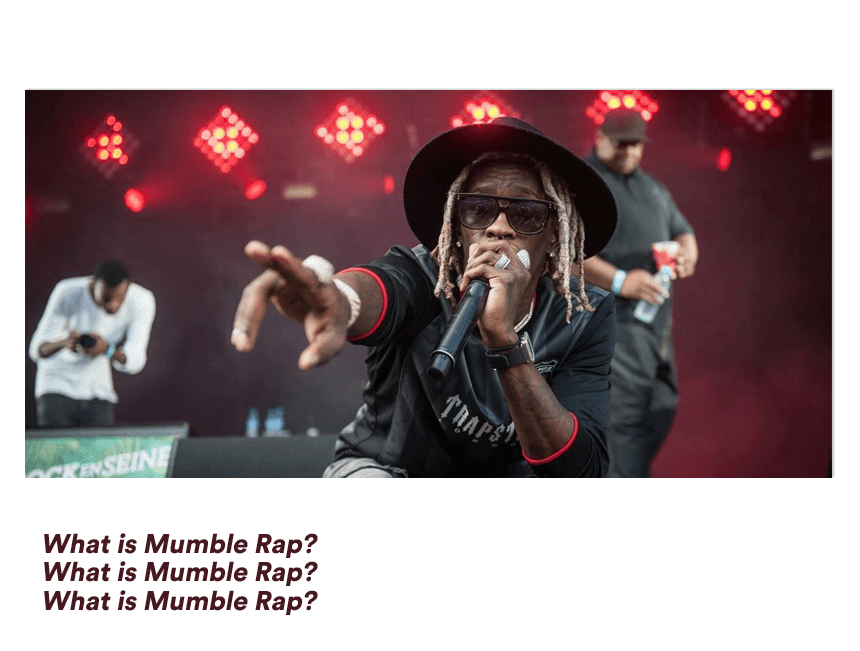 What is Mumble Rap?

Straight from the Southern states of America, Mumble Rap has taken its place on the Billboard Hot 100s and Rap history.

The last couple of years have seen a rise in alternative styles of Rap in Hip-Hop. A new generation of ‘mumble’ rappers are rapidly making a name for themselves. Future, Lil Pump, Lil Yachty, Lil Uzi Vert and Cardi B are just a few of the scene’s biggest stars, leading the new wave of rap culture to the forefront of the music charts. Historically, Hip-Hop has had its fair share of trends and styles shaking up the scene, ranging from Gangsta, Conscious, Crunk, West-coast, East Coast and Trap. New movements like this tend to spark excitement and debate with the artists and fans across the board.

Check out our list of the best mumble rappers in the game.

Where did Mumble Rap Come from ?

Hailing from the South of America, the genre stems from the glowingly popular sub-genre Trap. The particular style of vocalising used in mumble rap is increasingly frequent in modern hip-hop and is spreading across the world. By focusing on the repetition of the words and melody more than lyricism, the emotion is more dramatic. The use of pitched harmonies rather than slick, quick bars let the big bass drums dominate the song rather than the melodic instrumentals most people are used to when they think of hip hop.

This new sound has recently sparked interesting debates over its authenticity. The conversation revolves around its alleged lack of lyricism which is where the name ‘mumble’ comes from, supposedly coined by Wiz Khalifa. The sub-genre has recently received a huge amount of backlash from artists and fans, notably from J.Cole who’s heard dissing mumble rappers in his 2016 hit ‘Everyone Dies’: “A bunch of words and ain’t saying s***, I hate these rappers, especially the amateur-8-week rappers, Lil “whatever”, just another short-bus rappers”. Much like the East-West coast divide in the 90s, modern styles of rap clashing over conflicting style is no first for Hip Hop culture. Some think its lack of structure appears ‘idiotic’ and reflects the genre as a whole negatively but others appreciate it as art.

One of the original mumble purveyors Future has recently discussed his thoughts on the constant debates surrounding mumble rap. In an interview with HiphopDX he talks about his 2012 hit Tony Montana: “When I freestyle I know there are bits you don’t really understand, but that’s what you like it for – thats what its all about to me, thats art.” He also spoke of coming from the Dungeon family, a legendary hip hop collective based in his cousin Riko Wade’s basement in Atlanta, Georgia. Other members of the collective include Big Boi, Andre 3000, Cee Lo Green & Killer Mike. Their aim and intention with music was to always strive to be different and stay true to yourself. With this culture around him, Future inherited a sense of uniqueness and individuality through some of hip hops legends.

A game of loops?

Despite the backlash in the hip hop community, this style has been seen before in Hip Hop history, particularly Bone Thugs-N-Harmony who brought their distinct style of melody and flow to the table. Just like Scat singing evolved from Jazz and turned out to be a seminal part of the genre, could Mumble develop itself to define modern hip hop?

The recent release from Palestinian-Canadian rapper Belly titled ‘Mumble Rap’ outlines mumbles important position in the music scene. It’s just the beginning for this contemporary sound with new talent emerging everyday. Despite debates revolving authenticity, mumble has the potential to go down in music history and define the current decade.

To book mumble rappers like Lil Pump and Lil Uzi Vert, check out our Live roster.