Music director of Orquesta Sinfonica Simon Bolivar and the Los Angeles Philharmonic, Gustavo Dudamel is a well-decorated conductor. First studying conducting in 1995 following a background in violin and composition, Dudamel became the music director of the Orquesta Sinfonica Simon Bolivar just four years later. In 2004, Dudamel won the Gustav Conducting Competition and two years later he became the principal conductor for the Gothenburg Symphony. In 2007 he conducted the Stuttgard Radio Symphony Orchestra in the Vatican’s audience hall and the Vienna Philharmonic at the Lucerne Festival. Dudamel also conducted the Simon Bolivar Symphony Orchestra at the funeral of Hugo Chavez in 2013. Two years later he conducted the opening and ending titles for “Star Wars: The Force Awakens.” Then, in 2016, he was in the Super Bowl performance with the Youth Orchestra Los Angeles. At the beginning of 2017 he became the youngest guest conductor to lead the Vienna Philharmonic’s New Year’s Day Concert. In 2018 he conducted Verdi’s “Otello” at New York’s Metropolitan Opera.

In 2007 Dudamel began his career with the Los Angeles Philharmonic, beginning his tenure as music director in September of 2009. In February of 2011, it was announced the orchestra would extend Dudamel’s contract through the 2018-2019 season, four years later they extended his contract again through 2021-2022.

Dudamel’s prolific career has come with many decorations including winning the WQXR Gramophone Special Recognition Award in 2007 with the Oquesta Sinfonica Simon Bolivar. He was also featured on “60 Minutes” in 2008. The next year Dudamel won The City of Toronto Glenn Gould Protégé Prize. In 2011 he was “Gramophone’s” Artist of the Year and was also inducted into the Royal Swedish Academy of Music. The next year he won a Grammy for Best Orchestral Performance for Brahms Symphony No.4. He was then Musical America’s Musician of the Year in 2013 and joined the Gramophone Hall of Fame. In 2014 he won the Leonard Bernstein Lifetime Achievement Award for the Elevation of Music in Society from the Longy School and in 2016 was awarded the Americas Society Cultural Achievement Award. Rodrigo of “Mozart in the Jungle,” was based on Dudamel. Dudamel made a guest appearance in one of the episodes as well. In 2018 he won the Pablo Nerude Order of Artistic and Cultural Merit and the Dorothy and Lillian Gish Prize. Early in 2019 he received a star on the Hollywood Walk of Fame. 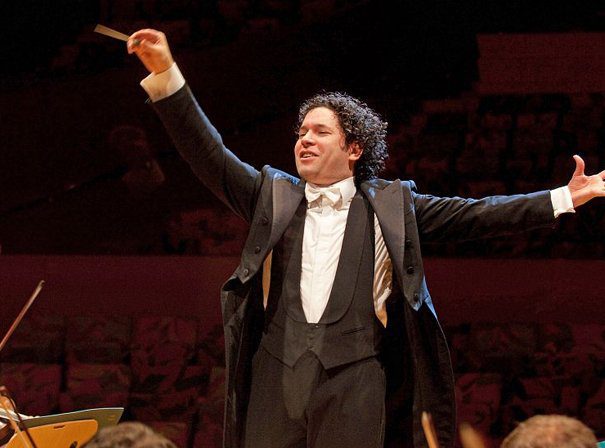