One of the greatest African Soccerers of all-time, Roger Milla is a Cameroonian athlete who appeared in three World Cups and became one of the first Africans to achieve international Soccer stardom. He scored four goals in the 1990 FIFA World Cup at age 38 and was named the best African player of the last 50 years by the Confederation of African Soccer.

Milla began his Soccer career in his home country of Cameroon, playing with clubs like Leopards of Douala and Tonnerre of Yaounde. After winning several awards, Milla moved on to playing at the top level in France. A high-scoring forward, he spent time with Valenciennes, Monaco, Bastia, Saint-Etienne, and Montpellier. In addition to his 1980 French Cup with Monaco, he memorably scored a goal in the 1981 French Cup final with Bastia. Milla also spent time with Indonesian Liga 1 clubs towards the end of his career.

A legend of international Soccer, Milla’s first appearances for Cameroon included the 1982 World Cup and the 1984 Summer Olympics. However, his career skyrocketed to new heights when he came out of retirement for the 1990 World Cup in Italy. He scored four goals throughout the contest, consistently performing an iconic dance around the corner flag afterward. He carried his team to the quarterfinals, the furthest an African team had ever advanced. Milla was awarded African Player of the Year, the second time he received the prestigious honor. He returned to the 1994 World Cup at 42 years old and scored a goal against Russia, setting the record for the oldest goalscorer in a World Cup tournament.

Milla was named to Pele’s FIFA 100 and is widely recognized as one of the best African players in Soccer history. He is now an ambassador for several African causes and spent several years as the manager for his former club Tonnerre. An icon of international Soccer, Roger Milla is an athlete that will be remembered for generations. 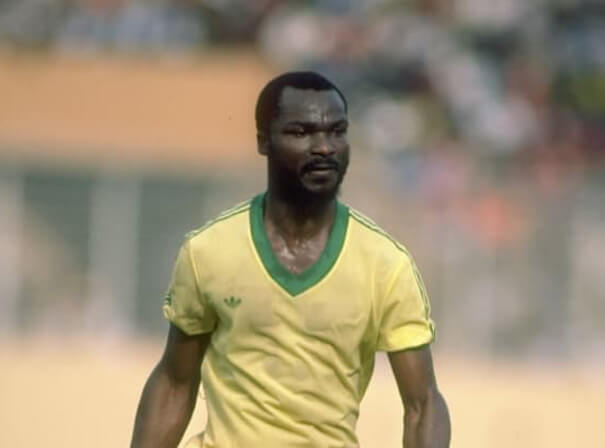