An acclaimed producer, songwriter and musician, guitarist Rob Caggiano is a triple threat who currently plays lead guitar for Danish rock band Volbeat. Caggiano has been nominated for five Grammy awards as a record producer/guitarist in a career that has seen him work with a diverse array of the world’s top artists, from Anthrax, H20 and The Damned Things to Bruce Springsteen and Jesse Malin.

As a world-class record producer/mixer, Caggiano has produced for Anthrax, Cradle of Filth and Jesse Malin along with numerous other prominent hard rock and metal bands, often under the pseudonym of Scrap 60 Productions.

Hailing from The Bronx, New York, Caggiano’s first band Boiler Room was formed in 1996. After releasing debut album Can’t Breathe in 1999 the band broke up, and Caggiano joined American heavy metal giants Anthrax in 2001. Caggiano appears on the albums Worship Music and We’ve Come for You All and on the compilation album the Greater of Two Evils. In 2010 he joined the band on notorious “The Big 4” tour alongside Slayer, Megadeth and Metallica.

In 2013 Caggiano left Anthrax and joined Danish rockabilly/heavy metal band Volbeat as the band’s lead guitarist after being called on as record producer for the band’s album Gentlemen and Shady Ladies. The chemistry between the rest and the band and Caggiano was so electric that the band asked him to join them permanently, and he has continued to record and tour with the group ever since as well as continuing to write and produce music. 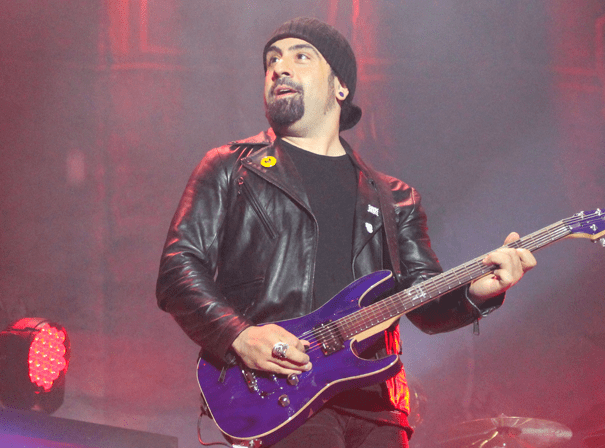