The incredibly talented professional soccer player, Aubrey Renee Bledsoe, keeps goal for Washington Spirit in the National Women’s Soccer League, as well as for Sydney FC in the Australian W-League. She received her first senior call-up to the United States national team in 2019. A deeply religious woman, Bledsoe also has a twin sister who happens to be a goalkeeper, too.

Bledsoe was born and raised in Cincinnati, knowing at an early age that football was to be her calling in life. She attended St. Ursula Academy where she was a member of the state championship soccer team in 2007 and 2008. Attending Wake Forest University to study health and exercise science, she played for the Demon Deacons, being named co-captain in her senior year. She holds the Wake Forest career record for shutouts (33), goals against average (0.91), games played and started (94) and minutes played in goal (8,692). Bledsoe is also one of three Demon Deacons to be named an All-American three times, earning third-team honors from the NSCAA in 2011 and 2012 and second-team honors in 2013. In 2014 she signed for USL W-League side Los Angeles Blues before going on loan to Norwegian side, IK Grand Bodø. The following year she signed with New Jersey side Sky Blue FC and secured an off-season loan to Danish club, Fortuna Hjørring, competing in the UEFA Women’s Champions League. In October 2015 she moved to Orlando Pride and in 2017 joined Sydney FC on loan. She was traded by Orlando to Washington Spirit in January 2018. That move was to be career-defining as Bledsoe was named Player of the Week twice and went on to break the NWSL League leading save record. She continued to play on loan for Sydney FC where she helped them reach their second straight Grand Final, going on to win it. Bledsoe was later named the 2018-19 W-League Goalkeeper of the Year.

Bledsoe is very active on social media, regularly keeping her legions of fans updated on her professional and personal life via Twitter, Instagram and through Facebook. 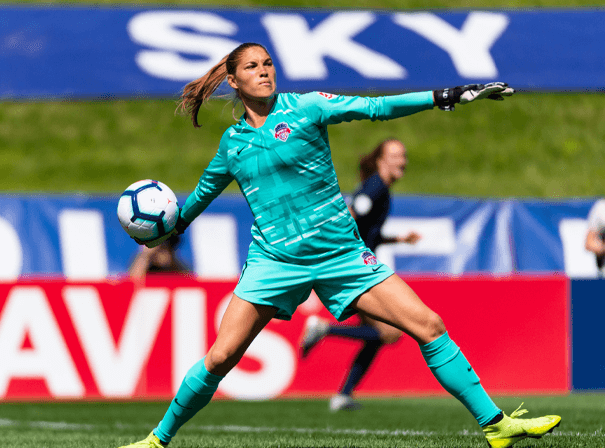