Colin McCarthy is a retired NFL linebacker. He played college football for the Miami Hurricanes and was regarded as one of the most promising linebacker options in the 2011 NFL Draft, where he was picked by the Tennessee Titans. McCarthy’s first career interception came on November 27, 2011, when he intercepted a pass from Josh Freeman. For his performance against the Buffalo Bills on December 4, 2011, McCarthy was named AFC Defensive Player of the Week and Pepsi NFL Rookie of the Week. McCarthy had nine tackles, one forced fumble, and two fumble recoveries to his credit. McCarthy was sidelined for the whole of the 2014 season due to a dislocated elbow. He announced his retirement from the NFL on June 4, 2015, at the age of 27.

During his time with the Hurricanes, McCarthy played strongside linebacker for 35 games before switching to middle linebacker in his senior season. He appeared in a total of 49 games, tied for sixth most in school history and just three less than all-time champion Brandon Meriweather (2002-06). McCarthy had 308 tackles in his college career, including 165 solo stops, and was a two-time All-ACC selectee. In 2010, he was Hurricanes team captain, an All-ACC honorable mention and the winner of the Hard Hitter award and the Plumer award for leadership, motivation, and spirit, the latter voted for by his teammates. 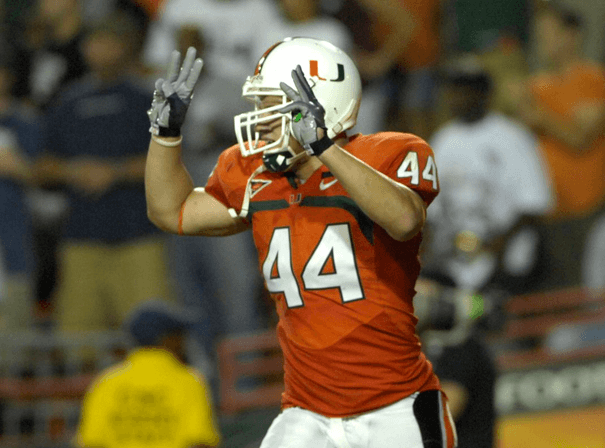