Mexican taekwondo athlete María Espinoza is an Olympic champion, a World Championships title-holder, and a Pan American Games gold medallist. She is also a two-time Central American and Caribbean Games champion, and a silver medallist at the Grand Prix. Espinoza competes in the +67kg and -73kg divisions, and was Mexico’s flag-bearer during the 2012 Olympic Opening Ceremony.

Espinoza’s first major success came with an impressive gold-medal win at the 2003 Pan American Youth Championships. Over the following seasons, she climbed the senior rankings and racked up medals at Open Tournaments, including golds in Germany and Paris. However, her career would reach new heights in 2007, when she won gold at both the World Taekwondo Championships in Beijing and the Pan American Games in Rio de Janeiro, demonstrating her dominance on the world stage, and marking her as one to watch at the following year’s Olympic Games.

At the 2008 Olympics, Espinoza advanced through the early rounds, and later claimed victory in the final over Norwegian first-seed Nina Solheim. The feat made her only the second female athlete from Mexico to win an Olympic gold medal, following weightlifter Soraya Jiménez eight years before. She has since medalled at the two subsequent Olympic Games, taking bronze at London 2012 and silver at Rio de Janeiro 2016. 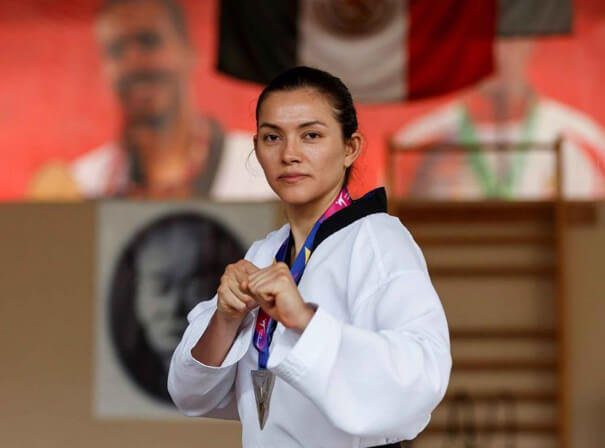